POLICE: WHERE IS ONOVO'S PENSION? 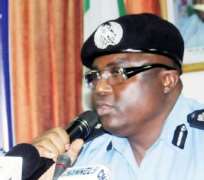 Last week I was accosted by some journalists for an interview on issues that border on the state of corruption, total lack of good governance and other manifestations of graft on the part of public office holders and even some key actors in the Nigeria’s private sector. I spoke my mind and told the media workers that corruption is the root cause of all human rights violations in Nigeria and emphasized that for good governance to bear fruit in Nigeria and for democracy to become an acceptable tradition among the common people of our great country, then we need to fight corruption and eradicate the menace because it has the infinite capacity to cripple Nigeria’s economy and inevitably result in the eventual collapse of the country as a modern day political entity.

Incidentally, as we spoke, the story broke out live in the leading Nigerian television stations especially the Nigerian Television Authority of the probe of the Security and Exchange Commission by the Federal House of Representative’s committee on capital market headed by Mr. Herman Hembe of the ruling Peoples Democratic Party [PDP] and an interesting dimension of the appearance of the Director General of the Security and Exchange Commission of Nigeria Miss. Arumah Otteh was the sensational disclosure that the House Committee demanded over N44 million bribe from the Security and Exchange Commission and that indeed the Chairman of the House Committee allegedly made a demand of a personal bribe of N5 million which the Director General rejected. Miss. Otteh made the disclosure in the wake of an equally damaging disclosure by the House Committee that the Director General blew over N30 million in the Hilton Hotel Abuja since her appointment into office as bills for recreation and accommodation.

It is also a notorious fact that some Special Advisers of the President recently appointed for more than three months are staying in the same Hilton Hotel and must have blown away hundreds of millions of tax payers’ money as hotel bills and shockingly no one has raised eyes brow or have any of us in the organized civil society made any attempt to demand from the President that he disclose how much his office has blown away in caring for the members of his over bloated Presidency staff who have put up in Hilton Hotel, the most expensive hotel in Sub Saharan Africa for three months or thereabout. Similarly, a scandal emerged from the Senate of the Federal Republic of Nigeria that some Nigerians including a serving Permanent Secretary were rounded up by the slumbering and increasingly weak Economic and Financial Crimes Commission[EFCC], for allegedly stealing several Billions of tax payers’ money from the coffers of the Nigeria Police Pension board. The Police Pension fraud assumed dangerous dimension when it emerged that a serving Permanent Secretary was arrested with a princely sum of N2 Billion cash inside his bedroom which he allegedly stole from the Nigeria Police Pension Board. Three Estates, two filling stations were also recovered allegedly from the same ‘thieving’ Permanent Secretary whose identity was concealed and who indeed is enjoying what the Economic and Financial Crimes Commission ridiculously called ‘administrative bail’, when other ‘smaller thieves’ and ‘yahoo boys’ [petty fraudsters] arrested by the same anti-graft body are languishing in different inhuman detention facilities run by the Economic and Financial Crimes Commission.

With all these groundswell of scandals and corruption ruining the Nigeria Police Force, one incredible fact is that even as a former Inspector General of Police Tafa Balogun was arrested and successfully prosecuted during the tenure of Mr. Nuhu Ribadu as Chairman of the Economic and Financial Crimes Commission for stealing nearly N19 Billion belonging to the Nigeria Police Force, there are still some good persons that have held the exalted positions of Inspector General of Police and Deputy Inspectors General of Police Like Mr. Ogbonnaya Onovo, Uba Ringim and seven other Deputy Inspectors General of Police who retired for over a year ago from the Police on the orders of the current President of the Federal Republic of Nigeria but who are yet to be paid their mandatory retirement benefits, pension and gratuity.

Ogbonnaya Onovo entered the history book as the first Police officer from the South East to have reached the pinnacle of the Police Profession as Inspector General of Police but he was removed by President Jonathan barely a year after assuming office even with three years left for him for his retirement.

Onovo left a very clean record as the Inspector General of Police and he alongside his Deputy Inspectors General served Nigeria with their enormous talents and skills and after about a year that they were retired; these good Nigerians are yet to be paid their statutory gratuities and pension. What type of a society will treat their best with disdain? Mr. President please pay retired Inspector General of Police Mr. Onovo and his retired Deputy Inspectors General their pension and gratuity.