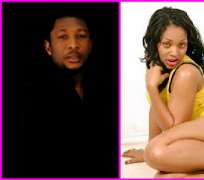 Nobody would have believed this development to be real if not that the prolific filmmaker circulated a press statement through his publicist, indicating that he and his pretty wife have agreed to go their separate ways and move on with their lives.

Insiders claimed that the reasons this decision was reached is because Tchidi is in love and wants to marry beautiful actress, Nuella Njuigbo whose love has eaten so deeply into his heart and is carrying his fourth child(their first together).

It could be recalled that Sophia in the past had to stay away from acting.In those periods,she was reportedly absorbing the headline news of all the sizzling love affairs that Mr. Chikere has with Nollywood actresses.

However, in the past one year,Sophia abandoned her old lifestyle of playing the good woman,returned to the limelight, and stormed movie location where she joined her old actress friends to attend parties and events especially in daming attires.

It was also disclosed by insider sources that Sophia had as in recent times allegedly followed the steps of her husband by hugging negative headline.Those in the know say while on movie locations she was reported of doing some deliqueit acts by rumour mongers.

Another reason which insiders claim prompted their breakup was the revelation that Tchidi discovered that his wife was not a student of the University of Lagos where he had been paying her school fees for the last nine years.

The revelation was a big blow,especially as she leaves the house every morning for lectures.He thought the course was prolonged because of the motherhood breaks she took to nurse their sons.

The new found way of life did not go down well with Mr. Chikere,as different episodes of misunderstanding was said to have erupted between them.

Meanwhile,the love affair Tchidi has with Nuella Njubigbo,reliable sources say is the last straw that broke the camels back.

Further findings revealed that Nuella is already wearing his ring,carrying his child and has forbade him contact with his wife and kids and because they live together,she does regular checks on his phone.