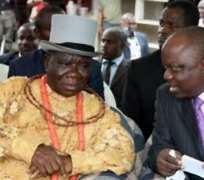 GOvernor Emmanuel Uduaghan of Delta State was indeed stunned to hear last weekend of a fresh rumpus between his associates and those of his one time estranged political father, Chief Edwin Clark.

'I will not do anything that will upset the peace process in PDP in the state. There is no problem between me and Chief Clark, we have resolved and the harmonization process is on, it has not broken down as you (reporter) said they have told you'.

Noting that those fanning the embers of discord were mainly members of the Clark group with membership of the rival Democratic People's Party, DPP,  Uduaghan singled out Chief Godwin Ogbetuo the chairman of the Delta Elders, Leaders and Stakeholders Forum, DELSF, for instigating the crisis within the PDP family even though according to him the said Ogbetuo had drifted away from the party.

'These are mainly people from the E.K Clark group, who are not in PDP,  but Democratic People's Party, DPP, and have refused to join the PDP properly'.

Referring to Ogbetuo, he said 'He never attended any of the PDP leaders' meeting held in Asaba and Warri. The agreement was for everyone to go for his or her ward for the ward congress. They refused to go. Instead, they kept calling Chief E.K. Clark, who is in the United Kingdom and feeding him with lies.

'The minister (Orubebe) and I, to the knowledge of the national secretariat have been deeply involved in bringing normalcy to the party and these non-party members cannot derail us', he asserted.

The said crisis arose after a meeting of the members of the PDP faction loyal to Clark where they refuted news reports first reported by Vanguard that the Clark and Uduaghan factions were now forging unity after years of acrimony.

Central to the unity it was learnt was the harmonization of structures during the ongoing congresses of the party. But at the end of the meeting of the Clark group after the ward and local government congresses, the group accused Uduaghan, his deputy, Prof Amos Utuama, former Minister of Information, Prof Sam Oyovbaire and others of turning the harmonization process to a master -servant affair.  They alleged that there was indeed no harmonization in the State PDP.

The Clark group, which has former Minister of State for Education, Olorogun Kenneth Gbagi as coordinator for Delta Central Senatorial District, Minister of Niger-Delta, Elder Godsday Orubebe for Delta South and Dr. Cairo Ojuogboh for Delta North, said that despite Clark's outstretched hand of fellowship, the members of the Clark group were treated 'shabbily as if there are first class and second class citizens in PDP'.

Gbagi refuting Governor Uduaghan's denial of schism said that the deputy Governor, Prof. Amos Utuma had so far made it impossible for the two groups to harmonise in the Delta Central.

The former minister  stated Dr. Uduaghan personally called him and the deputy governor, Utuama and urged them to work together to  avert trouble in the Central senatorial district. He, however, observed that his efforts to get the deputy governor to harmonize the interest of both factions, 50-50, as agreed, has not produced result.

According to him, he was he was taken aback when he called Uduaghan to notify him that the deputy governor was not being faithful to the agreement, only to hear that the state chairman of the party, Chief Peter Nwaoboshi, Mr. Sam Osasa and   the state's Commissioner on the Niger-Delta Development Commission, NDDC, board, Chief Solomon Ogba, had been selected to liaise with the national leadership of the party to harmonize the list from Delta list.

Chief E.K. Clark and Dr. Emmanuel Uduaghan
'It is then it dawned on me that some people are playing on our intelligence. How can they be talking about harmonizing list when we that are coordinators from our senatorial district are not aware of what is to be harmonized? In the first instance, I asked the governor, how can three persons be going to Abuja to harmonize matters without an Urhobo person in the team, this is wrong', he said.

Enough is enough: 'Enough is enough of this whole idea of deceit. Clark has told me that we cannot play a second fiddle, we demand an appropriate harmonization process based on the agreement reached by the leaders, but if this is not possible, we demand an unfastened, democratic and transparent process where all party members will aspire to any office of their choice at ward, local government and state levels through internal democratic process without encumbrance', he said.

Wounded lion: Chief Ogbetuo, who corroborated Gbagi's claims, said Clark told him what was going on in the name of reconciliation and harmonization was a charade and he was going to fight like a wounded lion when he comes back.

In the meantime, he said the elder statesman had directed all leaders of the party at the ward and local government levels to submit list of members for the various positions to the senatorial leadership for appropriate action when he returns.

Ogbetuo said the list should be submitted on or before March 15 as Clark was expected to return home by end of this week, adding, 'The issue of reconciliation is a complete failure in Delta Central senatorial district, it is like committing a treasonable felony in a democracy. What we met on ground was capital disappointment.

'It was as if no message had been passed to them that we are reconciling. Throughout Delta Central, there is no compliance with the directive'.

'On the reconciliation process of Delta PDP, Chief Edwin Clark and Uduaghan are on the same page. The Clark group has broken into two. One group is in the mainstream while the other has no relevance'.

Uduaghan lied - Ogbetuo
Chief Ogbetuo, who took umbrage at the governor's earlier remark by the governor that he was not a bonafide PDP member retorted, saying the governor lied against him.

He said he is a founding member of the party and because of lack of internal democracy, imposition of candidates and problems that emanated from the 2007 Governorship primaries, 'I joined forces with my national leader, Chief (Dr.) E.K Clark in 2007 to redress this injustice and return the party back to the people as the name of our party indicate.

'I have been with my leader, Chief E.K. Clark in all decisions reached, including supporting Chief Great Ogboru in 2011 Governorship election and President Jonathan during the presidential polls. In all these decisions I remained a member of P.D.P. under Clark's faction leadership', he said.

Ogbetuo said, 'The Governor knows that there are two factions in Delta State P.D.P. as a result of the 2007 Ogwashi -Uku Governorship Primaries and non conduct of ward congresses in 2007'.

Ogbetuo is not a PDP member - Oberabor
But Dr. Oberabor took up the defence for Uduaghan, saying, 'Ogbetuo is not a member of PDP, he is the chairman of Delta Elders and was not present at the PDP meeting in Asaba and Warri. Olorogun Kenneth Gbagi was in Asaba meeting and actually said the closing prayers'.

According to him, 'Clark and Uduaghan are reconciled on all fronts. That faction that held the meeting is completely dead, they have no agenda, Ogbetuo cannot ride on the back of the gubernatorial candidate of Democratic People's Party, DPP, and Chief Great Ogboru back to the PDP

Clark, Uduaghan move to extinguish tension
As at Monday, two days after the fresh face-off broke open; there were indications of high -capacity moves by Chief Clark and Governor Uduaghan to douse the uneasiness among their men.

Vanguard learnt that following a phone discussion with Clark, the elder statesman told the governor to call a meeting of both sides in the interest of the party.

The governor confirmed to Vanguard that he spoke to Chief Clark on the development and after listening to him, the elder statesman requested that he should convene a peace meeting of both groups to harmonize the areas of dispute.

Nothing has changed
Olorogun Gbagi, however, told Vanguard, 'Nothing has changed; the issue of reconciliation is not one side dominating the other. Anybody who has been following the politics of the state will know that what E.K. Clark offered is a genuine political initiative, it is left for the governor to reciprocate in the interest of the party'.

'If you want to know, what Clark told me that he told him is that the governor's group should sit down with his own group, comprising me (Gbagi), in charge of Delta Central Senatorial District, Minister of Niger-Delta, Elder Godsday Orubebe- Delta South Senatorial District and Dr. Cairo Ojuogboh- Delta North Senatorial District to look into the problems and resolve them in the interest of the party', he said.