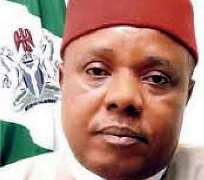 ABUJA, March 14, (THEWILL) - The Chairman of the Revenue Mobilization, Allocation and Fiscal Commission, Engr. Elias N Mbam on Wednesday told Senators that the 36 states in the country have a total external debt stock of $ 2.165billion, while that of the federal government stood at 3.501bn dollars.

He further disclosed that the domestic debt stock of the federal government was N5.622trn

Mbam made these revelations at a joint hearing of the senate committees on National Planning, Economic Affairs and Poverty Alleviation, Finance, States and Local Governments and Appropriation, which seeks to look into the looming danger of bankruptcy in the states.

However, he expressed concern at the huge domestic debt profile of the states with various local banks in short-term borrowing.

He added that they are substantially exposed to the capital market.

Therefore, he asked the National Assembly to limit the total exposure of states to external and domestic borrowing to not more than 20 percent of their monthly allocations from the federation account.

While he added that such borrowing should be for economic projects, he noted that there should be strict compliance to the relevant provisions of the Borrowing by Public Bodies, Act (cap. B10, LFN, 2004)

"Records available to commission from the Debt Management Office (DMO) show that as at December, 2011 the total external debt stock of all states (Multilateral) stood at S2.165bn while that of the Federal Government stood at S3.501bn and a domestic stock of N5.622trn for the federal government alone. The commission considers this debt profile as high.

"The commission has observed with concern the huge domestic debt profile of the states as most of them are highly indebted to various banks in short term borrowing and are substantially exposed to the capital market. Most of these loans are tied to Irrevocable Standing Payment Orders (ISPOs) issued to the Accountant-General of the Federation to deduct directly from their monthly statutory allocations. The implication is that these debt overhangs weigh heavily on the monthly allocations due to the States thereby preventing them from meeting their minimum basic obligations to the citizens".

He noted that endless deficit budgeting has endangered and forced states to resort to excessive borrowing in order to meet their basic expenditure demands even where they have no capacity to pay back.

He further added that the regular sharing of the Excess Crude Account is an indication of the "desperate financial position of the state governments to get funds in order to meet costs of governance."

He then called on the National Assembly to "consider appropriate legislations limiting the total exposure of states to external and domestic borrowing to not more than 20 percent of their monthly allocations from the federation account."

" There should therefore be more emphasis on capital projects," he said.