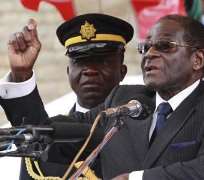 The capitulation of a major platinum miner to Zimbabwe's demand to hand over a majority stake to local black investors will embolden President Robert Mugabe's ZANU-PF party to pressure other foreign companies ahead of elections expected this year.

Other miners are likely be targeted to fill ZANU-PF election campaign coffers while the policy will be wrapped in the flag of liberation and portrayed as a hammer blow to the last remnants of white colonial rule, analysts said.

South Africa-based Impala Platinum, the world's second largest platinum producer and the biggest foreign investor in the country, bowed on Tuesday to Zimbabwe's pressure to surrender a 51 percent stake in its Zimplats unit, a cave-in that followed months of wrangling.

Platinum's spot price has been soaring and shot past gold on Tuesday.

Mugabe, 88 and in power since Zimbabwe gained independence from Britain in 1980, and top ZANU-PF officials have been hit with international sanctions after being accused of using political violence to stay in power.

One of Africa's longest-serving leaders, Mugabe is pushing for elections this year, one year ahead of schedule, arguing the unity government he formed with Movement for Democratic Change (MDC) leader Morgan Tsvangirai after a violent 2008 vote has broken down.

"This is more about ZANU-PF not having ready access to cash ever since the MDC took control of the finance ministry," said Tara O'Connor of Africa Risk Consulting.

"And dollarisation (of the economy) has taken away ZANU-PF's ability to print money and decimated the power of the central bank. They are strapped for cash and the mining industry has become the next target to fund the ZANU-PF patronage system," she added.

ZANU-PF has been criticised over the past decade for patronage when seizing white-owned farms. Many farms are now in the hands of party loyalists instead of the landless black peasants who were supposed to benefit.

VICTORY
"It will be construed as a big political victory for Mugabe and ZANU-PF and defeat for Tsvangirai who has been saying such actions will hurt the economy," said Tony Hawkins, a professor at the University of Zimbabwe's Graduate School of Business.

"The guys (ZANU-PF) will have certainly been emboldened and will look to extend this to the other mines," he said.

Other companies in the firing line now include Mimosa, a 50-50 joint venture between Implats and Aquarius Platinum, and Rio Tinto's Murowa diamond mine.

ZANU-PF has also been accused of profiting from the Marange diamond fields, where human rights groups estimate at least 200 artisanal, or small-scale, miners were killed in 2008 when Zimbabwe's security forces seized the workings. Mugabe's government has denied this.

The valuation of the Implats stake transfer has not been worked out and the murkiness surrounding the agreement has raised questions about where the funds will really go.

But 31 percent of the total is nominally earmarked to go to the state's National Indigenisation and Economic Empowerment Fund, which is ZANU-PF-controlled. Ten percent will go to local communities and 10 percent to Zimplats employees, according to the agreement announced by both sides.

The nationalisation drive also plays to the narrative ZANU-PF wants to weave for the election: the black liberation movement recovering assets seized by white colonialists.

"Mugabe is determined to show that he is the true Africanist taking back all the land and resources that whites have stolen. This is the image he wants to create," said Allister Sparks, a Johannesburg-based independent political analyst.

In contrast, ZANU-PF has persistently portrayed Tsvangirai, a former miner, as a puppet of white capital.

"Morgan loves the mining industry because he was a miner and was given his start in life by Anglo American. He is a miner at heart but he sees both sides of the picture and this policy is not good for the workers or investors," said Tsvangirai biographer Sarah Hudleston.

CONTROL
The ruling ZANU-PF welcomed the Implats decision. "We are absolutely delighted. We have said this time and again, that we need to control our economy and resources," said spokesman Rugare Gumbo.

"The opposition (MDC) has no programme. I do not take them seriously, they don't understand the dynamics of liberation and they are just parroting their masters' line of thinking," Gumbo added.

Zimbabwe is not the only African country that is pushing for a bigger share of state ownership in resources and so the ZANU-PF nationalisation march can also be portrayed as part of a wider Africanist agenda.

But while mineral-rich countries from South Africa to Ghana are trying to get a bigger slice of their resource pie, Zimbabwe stands out for its radicalism.

"Zimbabwe always provides us with an extreme example of things happening elsewhere. Resource nationalism is not unique to Zimbabwe, it is happening across the continent. But Zimbabwe is just taking it to extreme levels," said O'Connor.