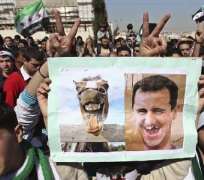 "Thirty tanks entered my neighborhood at seven this morning and they are using their cannons to fire on houses," said Karam Abu Rabea, a resident in Homs's Karm al-Zeitoun neighborhood.

One focus of demonstrations was the anniversary of Kurdish unrest in Syria in 2004 when about 30 people were killed.

Many thousands of Kurds demonstrated in northeastern cities, YouTube footage showed, some carrying banners that read "Save the Syrian people". Other clips showed hundreds of protesters in the Assali district of Damascus, burning posters of Assad's father Hafez al-Assad and chanting "God damn your soul, Hafez".

Tight media restrictions imposed by the authorities make it hard to assess conflicting accounts of events on the ground.

Street protests have swelled every Friday after Muslim prayers since the anti-Assad revolt erupted a year ago, despite violent repression by the military and loyalist militias.

Decisive victory has eluded both sides in an increasingly bloody struggle that appears to be sliding into civil war.

AID ACCESS
U.N. humanitarian chief Valerie Amos, who visited Homs this week, said Assad's government had agreed to join U.N. agencies in a "limited assessment" of civilian needs in Syria, but had not met her request for unhindered access for aid groups.

Syrian officials had asked for more time, she told a news conference in Ankara after visiting Syrian refugees arriving in growing numbers in border camps in Turkey.

Amos said she was "devastated" at the scenes of destruction she saw in Homs and that she wanted to know the fate of civilians who had lived in the city's Baba Amr district, which rebel fighters left on March 1 after a 26-day siege.

The United Nations estimates at least 25,000 refugees have fled Syria in the past year, said Adrian Edwards, a spokesman for the U.N. refugee agency.

The U.N. figures were based mainly on refugees who have registered with the UNHCR. Many others have fled to neighboring countries without registering. Edwards said significant numbers of Syrians are also thought to be displaced within the country.

Annan, who begins his peace mission in Damascus on Saturday, has called for a negotiated political solution, but dissidents say there is no room for dialogue amid Assad's crackdown.

Rifts among big powers have blocked any U.N. action to resolve the crisis, with China and Russia firmly opposing any measure that might lead to Libya-style military intervention.

China, which dispatched an envoy to Syria this week, said on Friday it would send an assistant foreign minister to the Middle East and to France to discuss a way forward.

Beijing urged Annan to "push for all sides in Syria to end their violence and start the process of peace talks".

Russia, an old ally of Damascus and its main arms supplier, has defended Assad against his Western and Arab critics, twice joining China in vetoing U.N. resolutions on Syria.

"We shall not support any resolution that gives any basis for the use of force against Syria," Russian Deputy Foreign Minister Gennady Gatilov tweeted late on Thursday.

Western powers have shied away from any such action. "The option of any military intervention is not on the table," French Foreign Minister Alain Juppe said in Morocco on Friday.

A Russian diplomat said Assad was battling al Qaeda-backed "terrorists" including at least 15,000 foreign fighters who would seize cities if government troops withdrew.

The Syrian opposition denies any al Qaeda role in a popular uprising against nearly five decades of Baathist rule.

Moscow could play a vital role in any diplomatic effort to ease Assad from power and spare Syria further bloodletting.

"If (Annan) can persuade Russia to back a transitional plan, the regime would be confronted with the choice of either agreeing to negotiate in good faith or facing near-total isolation through loss of a key ally," the Brussels-based International Crisis Group said in a paper this week.

Syrian security forces have killed well over 7,500 people since the anti-Assad uprising began a year ago, according to a U.N. estimate. The government said in December that "armed terrorists" had killed more than 2,000 soldiers and police.