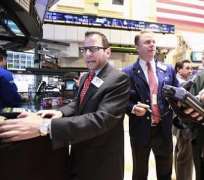 Stocks rose on Friday, adding to their best two-day run in nearly three months, after a report showed the economy added more jobs than expected in February.

Employers added 227,000 jobs last month, the Labor Department said, and the unemployment rate held at a three-year low of 8.3 percent. Investors were looking for a gain of 210,000 jobs, according to a Reuters poll.

"This continues to show that job growth is going at an encouraging pace," said Sean Incremona, an economist at 4Cast in New York. "Upward revisions to the previous month and a solid February keep that positive sentiment alive."

Also lifting stocks was Greece's winning strong acceptance of its bond swap offer to private creditors, averting the immediate risk of an uncontrolled default. The market had run up for two days on hopes of success.

Peter Cardillo, chief market economist at Rockwell Global Capital, had said a better-than-expected payrolls number would set the S&P 500 index to move up into the 1,385-1,400 range next week. The index closed at 1365.91 on Thursday.

"It will set the stage for the market over the next few trading sessions to establish a new trading range," Cardillo said.

Exactly three years ago the S&P 500 posted a 12-year closing low at 676.53 during the height of the financial crisis. The index has more than doubled since then, although it stalled last year before resuming a rally in 2012.

Shares in Texas Instruments Inc (TXN.O) fell 1.3 percent after the chipmaker said revenue growth would resume in the second quarter, signaling an end to the inventory correction that dogged it last year.

Shares in Green Mountain Coffee Roasters Inc (GMCR.O) sank 13.3 percent on fears it may lose its near monopoly in the U.S. single-cup coffee market after Starbucks Corp (SBUX.O) outlined plans to launch a rival coffee machine. Starbucks rose 2.7 percent to $51.72