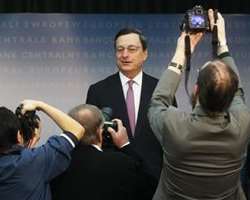 The European Central Bank signaled its policy course was slowly turning on Thursday, delivering a surprise warning on inflation and calling governments and banks to build on its recent blitz of radical support measures to foster a full crisis recovery.

The ECB kept interest rates at a record of low of 1 percent for a third month running as expected, after completing two monster injections of cheap cash which have flushed over a trillion euros of three-year money into the euro zone.

Despite lowering its euro zone growth forecasts, it strengthened its rhetoric about a euro zone recovery, saying there were signs of a pick up, rather than the phrase "tentative signs" it has used since the start of the year.

The central bank also raised its forecasts for inflation this year, partly because of climbing oil prices.

"At least for the time being, a rate cut is clearly off the table ... they took away the easing bias," said ING economist Carsten Brzeski. "They sounded a bit more positive but staff projections were worse ... at least the chance of the euro zone falling off the cliff is very low right now."

ECB President Mario Draghi left little doubt that unless there was a relapse in the debt crisis, the bank had now done all it planned to in terms of extraordinary measures and that governments and banks needed to take up the baton.

"Both LTROs (3-year loan injections) have had such a powerful effect ... we have to see exactly how the financial landscape has changed as a result," Draghi told the post meeting news conference.

MIXED FORECASTS
The ECB's staff forecasts showed the euro zone economy could shrink by 0.5 percent this year and at best grow by a meager 0.3 percent, a slight downgrade of its previous estimate but more upbeat than most private sector forecasts.

"Available survey indicators confirm signs of a stabilization in the euro area economy. However, the economic outlook is still subject to downside risks," Draghi said.

Meanwhile, a recent 20 percent rise in oil prices is rekindling inflation to some extent. It is now forecast to be higher, at between 2.1 and 2.7 percent this year, well above the ECB's target of close to but below two percent.

"Owing to rises in energy prices and indirect taxes, inflation rates are now likely to stay above 2 percent in 2012, with upside risks prevailing," Draghi said, the first words of warning on inflation for well over half a year.

The latest Reuters poll of 74 economists taken before the meeting showed the general view was that the ECB will hold rates at 1.0 percent until well into 2013.

The euro spiked after the warning on inflation although it settled lower again after the bank cut its growth forecasts.

SWEETNESS AND LIGHT
Draghi was in no doubt that the ECB's twin three-year funding operations, which pumped over 1 trillion euros into the euro zone banking system, had saved the currency bloc from a serious crisis.

Borrowing costs for debt strugglers such as Italy and Spain have tumbled as a result and Draghi said markets, including the interbank lending market, had reopened and "real money" investors were returning to euro assets.

"All in all, we see that great progress has been achieved," he said. "Simply compare what the situation was in November last year and what it is today."

While the euro zone economy has stabilized over recent months, in part thanks to the ECB's back-to-back rate cuts in November and December and the twin funding operations, there are growing signs of disquiet among some at the bank.

Bundesbank President Jens Weidmann aired his concerns in a letter to Draghi last month. Juergen Stark, the ECB's influential former head of economics, added his criticism by telling a German newspaper on Thursday that the quality of the central bank's balance sheet was now "shocking".

Stark was one of two German members of the ECB policymaking fraternity who quit last year in protest at policies they felt overstepped the central bank's remit. Draghi denied there was any split this time, singling out Weidmann.

"My personal relationship with Jens is excellent ... Nobody is isolated in the Governing Council and especially the Bundesbank is not isolated," he said. "I really cherish the culture and the tradition of the Bundesbank."

In his letter, which was leaked on the day of the ECB's second dose of three-year funds, Weidmann wrote about the imbalances in the euro zone's payment system, TARGET2, and the resulting risks for the Bundesbank, which would be exposed in the unlikely event of the euro zone breaking up.

Draghi played down those concerns.
"The balance sheets of the other major central banks have expanded in a short period of time much more than the ECB's," he said. "So at the present time, to say that the risks for the ECB balance sheet are now higher than what they are in the Fed and in Bank of England is not correct."