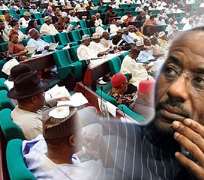 ABUNA, March 07, (THEWILL) - The House of Representatives was on Wednesday engulfed by pandemonium following a motion seeking to compel the summons of governor of Central Bank of Nigeria (CBN), Mallam Sanusi Lamido Sanusi, for donating monies totalling N500 million to victims of the blasts in Kano and Niger States, and to a bridge-building project in Edo State.

The atmosphere on the floor of the chambers became charged after a member from Yobe State, Hon. Goni Bukar Lawan(PDP/Yobe), in supporting the motion sponsored by Hon. Uzo Azubuike (PDP, Abia) referred to the CBN governor as a “terrorist.”

The contentious motion, raised by Hon. Uzo Azubuike(PD/Abia), was entitled: ‘Misuse of Public Funds by Central Bank of Nigeria (CBN) and the Need to Urgently Establish a Pool of Fund for Provision of Relief to Victims of Natural Disasters and some Specified Crimes.’

A prayer of the motion was the summons of CBN Governor. It was promptly granted, leading to a shouting match between opponents of the motion and its supporters.

The prayers called on the House to “invite the CBN governor to explain to the House where the Bank derived the power and authority to make monetary donations for infrastructural projects, emergency reliefs and philanthropic gestures.”

The other prayer urged the Federal Government to “set up a pool of funds to be managed by National Emergency Management Agency of Nigeria (NEMA) or any other agency involved in disaster management for the provision of relief, compensation and charity to victims of natural disasters as well as some specified crimes like terrorist attacks.”

Though the last prayer was jettisoned, the lawmakers considered the second prayer, consequently mandating the House Committee on Banking and Currency to examine the concerns raised by the motion.

Reading the motion that lasted over 45 minutes during which he cited books, the CBN Act and newspapers, sponsor of the motion, Hon. Azubuike observed that the CBN donations were done as though Sanusi Lamido Sanusi were an institution. He argued that sections 43 and 63 of the CBN Act did not permit the bank to indulge in corporate social responsibility, and he therefore implored the House to call the apex bank to order.

Supporting the motion, Hon. Goni reasoned that the CBN governor must have had bad intentions to have overlooked Yobe, which suffered a major hit.

“The moment I heard that the CBN governor, Sanusi Lamido Sanusi donated N100million to victims of Boko Haram attacks in Kano State, I quickly rushed to my constitution to see if Yobe State was no longer part of Nigeria,” he said. “The bombings happened in Yobe, before Kano State. So, are we not part of Nigeria?” he queried.

“When the Maj. Gideon Orkar coup happened in the regime of Gen. Ibrahim Babangida, Orkar said the entire North East was thereby by excised from Nigeria, and would be joined with Niger. So I was afraid that Yobe State was actually removed,” he joked. “I don’t think the CBN governor is doing a good job; this act of the CBN governor is an act of terrorism. He is a terrorist.”

The position of Hon. Goni Lawan led to a mix of anger and laughter from both supporters and opponents of the motion, who saw it as a move to incite the public against Sanusi.

There was angry rebuttal from Hon. Bashir Babale, a Peoples Democratic Party (PDP) member from Kano State. Babale sprang to his feet and motioned towards Goni Lawan, pouring expletives and spoiling for a fight, before he was seized by the arm by the Chief Whip, Hon. Ishaku Bawa(Taraba/PDP) who forced him to take his seat.

Thereafter, some northern caucus members, mostly from Kano, stormed out of plenary to protest Speaker Aminu Tambuwal’s refusal to allot speaking time to opponents of the motion before it was passed.

Raising Order 47 of the House Rules to protest their exclusion, Kano legislator, Hon. Aminu Suleiman accused the Speaker of bias. When the Speaker explained that the House could not reverse itself because the motion was passed before the Order, Suleiman led his caucus members out of the chambers.

Earlier, the lawmakers led by the sponsor of the contentious motion, argued that the apex bank’s helmsman had no business with philanthropy or donations to victims of disasters or projects, according to sections 35 and 63 of the Banks and other Financial Institutions Act (BOFIA) and section 42 of the 1999 Constitution. They stressed that the donations were illegal and in breach of the “over 28 responsibilities” of the CBN, as stated in the CBN Act and other subsidiary laws governing the operations of the bank.

Minority Leader of the House, Hon. Femi Gbajabiamila (ACN/Lagos) described the CBN under Sanusi as “spendthrift” and “bleeding the economy of the country.”

Also, Gbajabiamilah quoted section 42 of the 1999 Constitution and other relevant statutes, condemning in strong terms, Sanusi’s continuous refusal to present CBN’s budget to the National Assembly for approval.