BAUCHI: HOW FAR CAN YUGUDA WITH HIS RENEWED COMMITMENT? 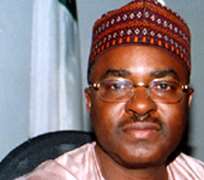 By SUZAN EDEH
WHEN Bauchi State Governor, Mallam Isa Yuguda, got re-elected into office during the April 2011 general elections, one of his campaign promises was to complete all on-going projects and programmes and embark on new ones that would have direct bearing on the lives of the citizenry.

In tandem with the promise, so far Yuguda's administration has completed 42 projects, cutting across health, education, youth and women empowerment, agriculture and power among others.

Some of these projects have been completed and awaiting commissioning. Determined not to betray the trust and confidence the people have in him, the governor has suspended contracts for new projects pending the completion of the on-going ones.

Gov. Yuguda
The governor showed his  commitment towards realising the projects through his 2012 budget proposal. Governor Yuguda   presented a budget of N132.5 billion to the State House of Assembly for the 2012 fiscal year as against N112 billion spent last year.

During the presentation of the budget, which was tagged, 'Renewed Commitment', Yuguda stressed that the budget was designed to consolidate the 2012 projects and facilitate the completion of the on-going ones.

Dire need for effective air transport
In this direction, the people of Bauchi State, for long, have been yearning for an organized air transportation system in the state. It was so embarrassing that whenever the state was hosting an important event, visitors coming into the state by air did so via airports in neighbouring states. An obvious minus, as it were, to the image of the state considered  as having one of the biggest tourist attractions in West Africa.

The Bauchi airstrip could only be patronised by the  rich and important dignitaries, who could afford the services of private jets and planes. Sadly enough, the airstrip faced a major setback last year during the general elections when the Nigerian Civil Aviation Authority (NCAA) put on hold flights to it.

The  airstripwas shut down following a near mishap involving a chartered aircraft carrying leaders of the Action Congress of Nigeria, (ACN), which landed on some wandering animals on the runway.

Reacting to the airstrip mishap, the NCAA spokesman, Mr. Sam Adurogboye, said critical areas must be addressed before the Bauchi airstrip would be reopened.  They include completion of  perimeter fencing of the entire field, fixing of pot holes, depression and cracks on some portions of the runway and taxiways, removal of buildings along runway 15and extended centre-lines that constitute danger to safe flight operation and re-touching of runway and taxiway markings to aid visual aids.

He also listed provision of patrol vehicles to enhance security patrol of the airstrip and other services, raising the height of the Control Tower building to command a panoramic view of the airfield, reconstruction of the fire station and provision of personnel.

Reps' intervention
Following the Bauchi air mishap, the House of Representatives last year asked the Ministry of Aviation to speed up the perimeter fencing of all airports in Nigeria. The House said that budgetary provision had been made for the perimeter fencing and expressed concern that the projects were yet to be implemented in most airports.

Former Aviation Minister, Mrs Fidelia Njeze was therefore ordered by the House to hasten the completion of the fencing of the Bauchi airstrip.

Bauchi steps in
Precisely in October 2011, the contract for the reconstruction of the airstrip was awarded with 70 per cent down payment but due some logistics, the contractors could not complete the project on schedule.

However, the contract was revoked and the contractors were sanctioned, which led to the Bauchi State Ministry of Transport and Works completing the project through direct labour. The Bauchi State Government spent N290 million to upgrade the safety standard of the airstrip to enable flights to resume.

Precisely on February 13 of 2012, safety facilities at the airstrip were commissioned by the Minister of Aviation, Stella Oduah. At the commissioning ceremony, which was well attended by members of the federal executive council and executives of the Aviation industry, the minister expressed concern over the safety of the Bauchi airstrip, saying that, 'following the accident that occurred during the visit of vice presidential candidate of the ACN, Fola Adeola, the Federal Government was concerned about safety measures at the airstrip and I am delighted that all facilities have been provided'.

Represented by the Director-General, NCAA, Dr. Harold Olusegun Demuren, the minister listed some of the safety facilities as the perimeter fence, fire fighting and 2.5 kilometre runway and communication equipment among others.

Governor Yuguda said with the new facilities now in place, commercial flights would soon commerce at the airport. 'The airstrip was reconstructed to the standard of civil aviation regulation for the safety of take-off and landing of our people.

With Bauchi State having one of the biggest tourist attractions, that is, the Yankari Games Reserve, we want the Federal Government to exploit the tourism sector in the country, instead of focusing on oil to generate revenue. This tourism potential in the state will further create employment opportunities and boost the economic status of the state,' he said and added that flight activities would commence next week.

Another similar remarkable air transport project presently embarked by the administration of Isa Yuguda is the on-going construction of an ultra-modern airport in the state. The state government last year signed a N7.9 billion contact with the Triacta Construction Company (TCC) out of the 15 companies that applied for the job. The stipulated period for the completion of the project is 28 months and the government has compensated owners of the land, where the project is cited.

The Commissioner for Special Duties, Alhaji Bappah Azare, who signed the Memorandum of Understanding, MOU, on behalf of the state government said when completed, the airport would attract investors and improve economic development, not only in the state, but in the entire North-East zone.