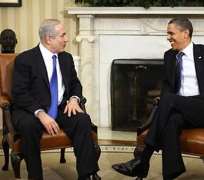 Benjamin Netanyahu assured President Barack Obama on Monday that Israel has not made any decision on attacking Iran's nuclear sites, sources close to the talks said, but the Israeli prime minister gave no sign of backing away from possible military action.

With Obama appealing for more time to allow international sanctions to work against Tehran, the two men agreed to keep up their coordination on the issue, but differences remained on how to prevent Iran from developing nuclear weapons.

Even as the leaders sought to project solidarity in their White House meeting, the most pointed reminder that Israel might end up acting on its own was Netanyahu's insistence that the Jewish state must be the "master of its fate."

Behind closed doors, Netanyahu confirmed to Obama that Israel has yet to decide whether to hit Iran's nuclear sites, though it retains the right to use military action, the sources close to the meeting said.

But there was no immediate sign that Obama's sharpened rhetoric against Tehran and his plea for Israeli restraint had caused Netanyahu to reconsider what Washington fears could be a rush to attack Iran's nuclear facilities.

And the sources said Obama - who has publicly backed Israel's right to self-defense - made no such request to right-wing Israeli leader, with whom he has had a sometimes strained relationship.

"The pressure (on Iran) is growing but time is growing short," Netanyahu was quoted as telling Obama during what was seen as the most consequential meeting of U.S. and Israeli leaders in years.

Later, addressing the influential pro-Israel lobby AIPAC, Netanyahu said: "None of us can afford to wait much longer. As prime minister of Israel, I will never let my people live in the shadow of annihilation."

At the podium, he held up a copy of a 1944 letter from the U.S. War Department to world Jewish leaders turning down their request to bomb the Nazi death camp of Auschwitz.

Drawing a parallel with arguments against attacking Iran, Netanyahu said the War Department explained that such an operation at Auschwitz could provoke "even more vindictive action by the Germans".

"Think about that, even more vindictive action than the Holocaust," Netanyahu said.

Obama, facing election-year pressure from Israel's U.S. supporters and Republican presidential contenders, sought to reassure Netanyahu the United States was keeping its own military option open as a last resort and "has Israel's back."

But he also urged Israel to allow international sanctions and diplomacy to work to thwart Iran's nuclear ambitions.

SELF-DEFENSE
Netanyahu, who has made clear that Israel is operating on a shorter timeline than the United States, warmly welcomed expressions of U.S. resolve against Iran but also declared that Israel was entitled to "defend itself, by itself."

While the United States and Washington share a commitment to prevent Iran from becoming nuclear-armed, Israel sees a threat to its existence from Tehran atomic program, which Iranian officials say has only peaceful purposes.

"We do believe there is still a window that allows for a diplomatic resolution to this issue," Obama said.

Even though Obama has ratcheted up his tone against Iran in recent days, he and Netanyahu went into the talks divided over how quickly the clock is ticking toward possible military action. The meeting appeared unlikely to change that.

In private, the leaders made no concrete decisions but looked at both the price of taking action against Iran - which could spike oil prices and sow global economic upheaval - and the consequences of inaction, which could lead to a nuclear arms race in the Middle East.

They remain far apart on any explicit nuclear "red lines" that Iran must not be allowed to cross, and officials on both sides said the question was not even raised in the White House talks.

Despite that, the body language between the two leaders was a stark contrast to their last Oval Office meeting in May 2011 when Netanyahu lectured Obama on Jewish history and criticized his approach to Israeli-Palestinian peacemaking.

This time, Obama and Netanyahu appeared businesslike but cordial as they sat side-by-side, chatting amiably as reporters entered the room and sometimes nodding when the other spoke.

Obama's encounter with Netanyahu was considered crucial to preserving the trust of America's closest Middle East ally, which fears that time is running out for an effective Israeli strike on Iran, and to counter election-year criticism from Republican rivals who question his support for the Jewish state.

He is also trying to tamp down increasingly strident talk of another war in the region, which could have damaging repercussions for the fragile U.S. economic recovery - a consequence that could threaten his re-election chances.

Speculation has mounted that Israel could opt to act militarily on its own unless it receives credible guarantees that the United States will be ready to use force against Iran if international sanctions and diplomacy fail.

Israel, believed to be the only nuclear weapons power in the Middle East, fears Iranian nuclear facilities may soon be buried so deep that they would be invulnerable to its bunker-busting bombs, which are less powerful than those in the U.S. arsenal.

Israel insists that military action against Iran would be warranted to prevent it from reaching nuclear weapons capability, as opposed to when it actually builds a device. Washington has not embraced that idea.

U.S. officials say that while Iran may be maneuvering to keep its options open, there is no clear intelligence that the country has made a final decision to pursue a nuclear weapon.

Mitch McConnell, the U.S. Senate's top Republican, told the AIPAC meeting he would propose that Congress authorize the use of force against Iran if the U.S. intelligence community finds that Iran is enriching uranium to weapons grade levels or has decided to develop a nuclear bomb.

Obama said both he and Netanyahu "prefer to resolve this diplomatically" and also understand the cost of military action.

Netanyahu did not echo that sentiment, saying instead that "Israel and America stand together."

After talks with Obama and his aides and lunch with the president, Netanyahu told reporters, "They understood Israel's position that it has a right to defend himself."