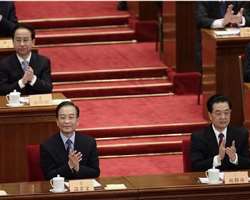 CHINA'S PRESIDENT HU JINTAO (FRONT R) AND PREMIER WEN JIABAO (FRONT L) CLAP AS THEY ATTEND THE OPENING CEREMONY OF THE CHINESE PEOPLE'S POLITICAL CONSULTATIVE CONFERENCE (CPPCC) AT THE GREAT HALL OF THE PEOPLE IN BEIJING MARCH 3, 2012.
Listen to article

Chinese Premier Wen Jiabao cut his nation's 2012 growth target to an eight-year low of 7.5 percent and made boosting consumer demand the year's first priority as Beijing looks to wean the economy off its reliance on external demand and foreign capital.

He lowered the target from a longstanding annual goal of 8 percent, a move investors anticipated so that Beijing has some economic leeway to rebalance the economy and defuse price pressures in the run up to a leadership change later this year.

Lower growth will allow Beijing to reform key price controls without causing an inflation spike, so monetary policy can stay broadly expansionary to ensure a steady flow of credit to the small and medium-sized firms the government wants to encourage.

"We aim to promote steady and robust economic development, keep prices stable, and guard against financial risks by keeping the total money and credit supply at an appropriate level, and taking a cautious and flexible approach," Wen said in his annual work report to the National People's Congress (NPC), China's annual parliamentary session.

The premier named "expanding consumer demand" as his first priority for 2012, when the ruling Communist Party must also navigate a leadership handover that will send Wen and President Hu Jintao into retirement in 2013.

"We will improve policies that encourage consumption," Wen told nearly 3,000 delegates of the Communist Party-controlled legislature, gathered under the harsh lights and high ceilings of the Great Hall of the People.

"We will vigorously adjust income distribution, increase the incomes of low- and middle-income groups, and enhance people's ability to consume," said Wen.

His annual state-of-the-nation report to parliament dwelled on the institutional and income barriers the government must break to build a more balanced economy that relies less on exports and shares more wealth with hundreds of millions of poor farmers and migrant workers who are reluctant to spend.

Wen and Hu have vowed to wean the economy off dependence on exports, smoke-stack industries and government-backed infrastructure, and promote balanced growth that will elevate the incomes and spending of farmers and workers.

Sources had earlier indicated to Reuters that the growth target would be cut to 7.5 percent. Growth of level would be the lowest since 1990.

In reality, the target acts more as a bar to get over. The 8 percent target set in the previous eight years was comfortably exceeded each year -- including in the aftermath of the 2008/09 financial crisis.

"In recent years, the GDP target has obviously always been a minimum acceptable floor rather than a ceiling, so I think it is more likely that in the government's heart of hearts, it is leaning on growth of a bit above 8 percent," said Paul Cavey, an economist with Macquarie Bank in Hong Kong.

"It seems very unlikely there will be huge progress on structural reforms given the political transition," added Cavey.

ECONOMIC, REFORM ANXIETIES
The highest-value part of China's growth and around a quarter of its 800 million-strong workforce are dependent on volatile demand and capital from developed economies.

Shifting that balance is a key goal for Wen and Hu, both 69, as they near the end of a decade in power which has seen China become the world's second-largest economy after the United States, contributing more to global growth than any other nation, while seeing a chasm widen between rich and poor.

Stability, steady growth and spreading wealth are core justifications for more than 60 years of one-party rule by the Communist Party, which will install a new cohort of leaders by the end of 2012.

Wen and Hu will officially step down as premier and president at the national parliament session early next year.

The last year in power for Wen and Hu has shuddered with anxieties about inflation, a feverish property market, local government debt, stubborn inequality and social strains from protesting villages to ethnic tensions in western regions.

The NPC is likely to bring into focus a deepening worry that Hu and Wen have squandered chances for reform because of fears of instability ahead of the leadership transition.

When they hand over power in late autumn, China could be headed for its slowest full-year of growth since Hu and Wen took office a decade ago. The economy ended 2011 with its slackest quarter of growth in 2-1/2-years at 8.9 percent as it felt the chill of the euro area debt crisis and a sluggish U.S. economy.

The outlook for the real economy remains cloudy, according to the latest surveys of China's vast factory sector and the burgeoning services industries that are key to rebalancing growth and generating more stable domestic-driven demand.

A survey from HSBC of purchasing managers in China's services industry showed the sector running at its fastest in four months, although it was well below its long-term trend.

A similar survey from the National Bureau of Statistics showed services activity running at its slowest pace in a year.

Meanwhile, surveys last week signaled that activity in big firms bounced back in February on strong new export orders while smaller companies lagged behind the rebound.

Credit is crucial to keeping the economy turning. Wen projected money supply growth of 14 percent while setting a 4 percent target for inflation for the year, in line with the target set in 2011.

He said the government would work to prevent a rebound in prices in 2012. Inflation remained stubbornly above official targets in every month of last year.

Wen also pledged to curb speculative demand in the property market, and said the yuan would be kept "basically stable" with strengthened two-way flexibility in the closely managed exchange rate.

Critics, including prominent policy-advisers, have said the Chinese government can foster healthy long-term growth only by taking on bolder reforms to rein in state-owned conglomerates and other entrenched interests -- reforms that ultimately spill into sensitive issues of curbing the party's own powers.

Wen has stood out among China's leaders as the most persistent advocate of measured political relaxation, and has cast himself as a passionate advocate for farmers struggling with economic insecurity and land lost to developers.

"We should care more deeply for rural migrant workers and provide more services to them," he said. "We will place farmland under strict protection."