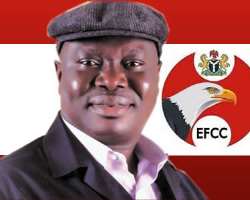 LAGOS, March 01, (THEWOILL) - After series of false starts, Speaker of the Lagos State House of Assembly, Honourable Adeyemi Ikuforiji was today arraigned by the Economic and Financial Crimes Commission (EFCC) at a Federal High Court in Lagos on a 20-count charge of money laundering.

Alongside his Personal Assistant, Mr Oyebode Alade Atoyebi, who was equally arraigned, the Speaker was accused of using his position to launder more than N500 million belonging to the Lagos State House of Assembly.

EFCC’s charge sheet contained that Ikuforiji and Atoyebi conspired among themselves between April 2010 and July 2011 to “do an illegal act by accepting various cash payments from the State Assembly without going through a financial institution ...and making various cash payments in aggregate sum of N503 million from the House of Assembly without going through any financial institution.”

EFCC Prosecutor, Chief Godwin Obla, argued that the offence allegedly committed by the Speaker and his aide is contrary to Section 1(a) of the Money Laundering Prohibition Act, 2004, and is punishable under Section 16(3) (b) of the same Act.

With both men pleading not guilty to the allegations, their counsel, Tayo Oyetibo (SAN) asked the court for bail on self-recognition, the Speaker being the “third citizen in Lagos State” and the other “an aide to the Speaker.” While the EFCC did not oppose the bail applications, it urged the Court to impose conditions on the bail to be granted to the Speaker’s aide.

Presiding judge, Justice Okechukwu Okeke granted Ikuforiji bail on self-recognition, and adjourned to the 26 & 27th of March, but he ordered the clerk of the Lagos State House of Assembly, Mr. Segun Abiru, to stand as surety to the Speaker’s PA.