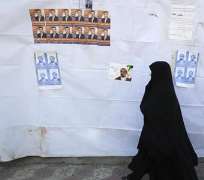 Afghanistan must act quickly to tackle infiltration of its security forces or another fatal attack on Western forces could undermine ties with NATO, a senior Afghan defense ministry official said on Wednesday, in a rare admission of the threat within.

On Saturday, a U.S. lieutenant colonel and a major were shot at close range while working in an office in the heart of the Interior Ministry, one of the most closely-guarded buildings in Afghanistan.

A stunned NATO quickly withdrew all staff from ministries dotted around the Afghan capital following the attack which came after the burning of Korans in a NATO base triggered deadly riots in parts of the country.

"We must make great efforts to prevent infiltration. This is a challenge for us," the official, speaking on the condition that he not be identified because he did not have the authority, told Reuters.

"It's a very serious matter."
Afghan security officials believe Abdul Saboor, a police intelligence officer, killed the Americans. He is at large.

The attack called into question NATO's strategy of replacing big combat units with teams of special advisors like the U.S. officers who were gunned down.

Their work is a key part of NATO's training mission to create reliable Afghan security forces to take over before foreign combat troops leave by end-2014.

"If we don't deal with infiltration then Afghanistan will suffer. We will lose credibility with NATO and the rest of the international community," said the ministry of defense official.

According to the Pentagon, around 70 members of the NATO force were killed in 42 insider attacks from May 2007 through January 2012.

These attacks have become more frequent as the United States has sent tens of thousands of more soldiers to Afghanistan as part of a surge to fight in Taliban strongholds.

Last month, French President Nicolas Sarkozy suspended training and support operations and announced that France would withdraw entirely by the end of 2013 after four French troops were killed by a rogue Afghan soldier.

The Ministry of Defense official said the large size of the Afghan army and police -- about 250,000 -- made it difficult to stop infiltration.

Afghanistan hopes to create a force of about 350,000 and then trim some of it.

"Our intelligence agencies will have to work on tapping phones and monitoring people's movements," said the official. "The bigger the force gets the harder it will be to fight infiltration."

Although the possibility of Taliban infiltration of Afghan forces is most worrying for U.S.-led NATO troops, the defense official expressed concerns that any type of incident could be harmful to strategic ties.

"Whether it is the Taliban or someone who is mentally ill we have to avoid it at any cost."