POMP IN LAGOS AS AWOLOWO HOUSE IS DEDICATED 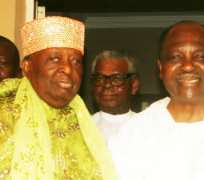 The building, which was donated for the use of the organisation by its Executive Director, Nigeria's former ambassador to the Netherlands, Dr. Olatokunbo Awolowo Dosunmu, is located on Lanre Awolokun Road, Gbagada Phase 2, Lagos, and was built up within a space of five months.

In his remarks at the occasion, Gen. Gowon recalled the enormous contributions to national development made by the late sage, Chief Obafemi Awolowo who managed the nation's finances so prudently that there was no need for the country to borrow in order to prosecute the civil war. Turning to Dr. Awolowo Dosunmu, Gowon described her as papa's illustrious daughter who had within her own resources ensured that the foundation now has a building to its name. Gowon enumerated the educational policies of his administration, which, according to him, drew inspiration from the philosophy of the late sage.

According to him, such policies as the establishment of unity schools across the nation's geopolitical zones as well as improved public expenditure on the expansion of educational opportunities for as many Nigerians as possible were all derived from Chief Awolowo's untiring advocacy of enhanced and free education at all levels. This, he said, was also the idea behind the establishment of technical colleges which were designed to build a more socially inclusive educational platform for the less privileged as well as to harness Nigeria's technology potential through practical and vocational skills enhancement.

A Muslim cleric was later invited to offer prayers for the success of the foundation. Many were surprised when one of the officiating ministers, Bishop Adebiyi revealed in the course of his exhortation that his cousin is the Chief Imam of his hometown. He said the Muslim cleric was sufficiently gratified by his elevation to the Bishopric that he donated a cow to the festivities marking the event. This obliging disposition, according to Adebiyi, inaugurated the beginning of keen inter-religious activities involving both Christians and Muslims in his hometown.

Also speaking, Sir. Olanihun Ajayi, a close ally of the late sage said while there are many people who know about Chief Awolowo, the number of people who knew Chief Awolowo was dwindling by the day. He urged the foundation to document closely the activities and teachings of the sage in order to edify the nation in the areas of value formation, vision and leadership. He also paid tribute to Dr. Awolowo Dosunmu for carrying forward the legacy of her father through her diligent work at the foundation.

The executive director, while speaking, laced her speech with various praise songs. She expressed her gratitude to the invitees who she said had responded to her invitation at very short notice. Quoting from the book of Psalms, she narrated how the idea of the building was conceived in the distressful circumstance of having to find a new location for the foundation's office at very short notice. 'The building being dedicated is a product of that adverse circumstance as well as the flashes of inspiration to embark on the project which fruition was being celebrated today,' she said.

She promised that the organization would shortly commence the recording of oral narratives from the mouth of those men and women who have intimate knowledge of Chief Awolowo. She also thanked her mother for attending the event in spite of the limitations imposed by her age and despite the fact that she took ill a few days to the event. According to her, mama's conduct and concern was in keeping with the role that she had always played in the upbringing and motivating of her children particularly at those times when papa Awo was unavoidably absent from home in the course of his political career.

She reiterated that the foundation had always striven to carry forward the legacy of service and giving to others, which she noted were the hallmarks of Chief Awolowo's political philosophy.