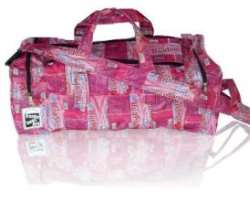 "Our bags are complete trash" may not strike you as the perfect sales pitch. But one Ghanaian entrepreneur would beg to disagree. His Trashy Bags venture is turning the scourge of discarded plastic that litters this corner of west Africa into a cool fashion accessory.

Plastic bags are a ubiquitous feature of the African landscape not seen in coffee table books or travel magazines. In Ghana they line roads, hang from palm trees, float in the sea and gather in drifts on the white sandy beaches. In Ghana's capital, Accra, they clog the sewers that run alongside roads turning gutters into stinking repositories of stagnant water and faeces and prime breeding grounds for malaria-carrying mosquitoes.

Looking around the city, a businessman Kwabena Osei Bonsu decided something needed to be done. "I wanted to come up with an idea that would solve problems in my lifetime," he said. His solution? Collect the discarded plastic bags and stitch them together to make new, reusable bags.

In the Trashy Bags workshop a dozen tailors and seamstresses sit at manual sewing machines stitching together old plastic sachets. In west Africa tap water is not fit to drink so millions of half-litre "pure water" sachets costing only the equivalent of 2p are discarded by thirsty consumers every day. A storage room overflows with more than three million sachets that have been collected and cleaned ready for recycling.

In Accra, a small city of 2.2 million people, up to 60 tonnes of plastic packaging is dumped on the streets every day, a figure that has risen by 70 per cent over the past decade. "This menace of plastic waste has taken over our entire nation," said Sandra Wilson, a Ghanaian environmentalist, "it pollutes our soils, chokes our drains, breeds malaria and is unsightly".

Local people arrive at the Trashy Bags workshop carrying sacks stuffed with thousands of the sachets on their heads. They exchange 1,000 sachets for £2 – good money in a country where the average person earns only £254 a year.

"I collect sachets because I am jobless and this gives me money," said Hadiza Ishmael, a 55-year-old grandmother who had just arrived with 4,000 sachets. "It also makes the place look nicer."

Momentum is building to fight the blight of plastic bags globally. Plastic bags are banned or face restriction in Zanzibar, Rwanda, Somaliland, Tanzania, South Africa and Uganda. Modbury in Devon became the first European town to ban the issuing of plastic bags last year, and San Francisco the first American city. Paris and London are expected to follow suit.

Trashy Bags was launched in December last year, and so far has collected seven million used sachets from the streets, and sold more than 6,000 bags. Small recycled handbags sell for £4.

BY: Tristan McConnell in Accra