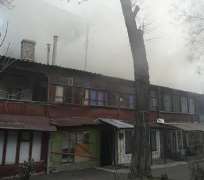 "I can officially confirm that they were preparing an (assassination) attempt on Putin," said Marina Ostapenko, a spokeswoman for the SBU.

Ostapenko said two men were under arrest. One was seized in Odessa after being wounded in an explosion at an apartment in the city on January 4 which also killed another alleged plotter.

The second man, who was on the international wanted list, was arrested a month later after initially escaping, she said.

"We found him in an apartment and detained him without a single shot being fired on February 4," she said.

Some Russians reacted with skepticism, making clear on social network sites that they did not believe the report or suggesting the timing of the announcement was intended to attract sympathy for Putin before the March 4 election.

Opinion polls show Putin, a former KGB officer who crushed separatists during a war he launched in the Chechnya region in the North Caucasus before he became president, will easily win the election and reclaim the post he held from 2000 until 2008.

But he faces a growing opposition protest movement and wants to secure outright victory on Sunday, averting a runoff that might dent his authority.

The appearance of broad electoral fraud in December parliamentary elections has stirred skepticism about Putin largely among liberals and nationalists in the cities of Moscow and St Petersburg. The internet has been used to mobilize anti-Putin protests over the last three months.

One person, identified only as zilnur, said on his Russian-language Twitter feed: "I am watching the news on TV - Putin uncovered an assassination attempt on himself. Just before the election ... Clowns."

Several assassination attempts have been reported on Putin since he rose to power in 2000 but such reports have rarely made a big impact in Russia.

The chief insurgent group fighting for an Islamist state in the mountainous north Caucasus is known as the "Caucasus Emirate." It has carried out a chain of attacks including the suicide bombing of Russia's busiest airport last year that killed 36.

It says it will strike at political and economic targets in the Russian heartland.

Russia's Channel One said the plotters had been planning to travel to Moscow to kill Putin but the Ukrainian special services had been tipped off by the Russian FSB security service, which Putin once headed.

"Our final goal was to go to Moscow and attempt to assassinate Putin," a man described as one of the plotters was shown as saying on Channel One. "Our deadline was after the election of the president of Russia."

Putin's spokesman, Dmitry Peskov, could not immediately be reached for comment.

Putin, 59, also did not comment immediately although aides said he had chaired a government meeting on the military-industrial complex at his residence of Novo-Ogaryovo outside Moscow on Monday.