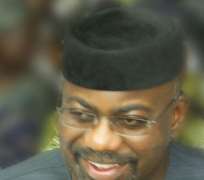 By Johnbosco Agbakwuru
Senator Liyel Imoke of the Peoples Democratic Party, PDP, was Sunday declared winner of the governorship election conducted on February 25, by the Independent National Electoral commission, INEC, in Cross River state. Twelve political parties contested the election which has been adjudged as the freest election conducted in recent times in the state.

Expectedly, the PDP won the election, though, there was poor turnout in most parts of the state,  the turnout in the Northern senatorial zone was, however, encouraging.

It was gathered that all the political stalwarts of the PDP and the governorship candidates used the paramount rulers to mobilize their subjects to vote in the election in the North especially as the zone plans to take over from Imoke after his next four years if he could keep to the promise he made to them in one of his town hall meeting in Ogoja.

As the opposition parties were unable to organize themselves well to confront the PDP, Imoke used all the arsenals available to him to campaign in all the parts of the state with all his former commissioners and other political appointees providing the legwork.

Gov – elect, Imoke
He campaigned as if his party was not in power, traversing all the nooks and crannies of the state soliciting votes.

Some programs implemented by the Imoke administration such as the free health care for pregnant women and children under five years called Project Hope equally endeared him to the people.

Imoke like Duke before him, was uncomfortable with the presence of opposition and had once he came to power in 2007 wooed the more prominent opposition figures into his government.

Those who remained were those who could not be wooed and who anyway were of no practical electoral impediment.

Besides, most of the opposition candidates were cash trapped and could not afford to provide the 'political logistics' to the people and some did not even do enough campaigns to sell themselves to the electorate.

It was also alleged that the serving political appointees were under instruction to deliver their wards and units if they want to continue to enjoy their positions in government.

Another factor, was the women factor. As Imoke embarked on aggressive campaigns, his wife Obioma also mobilized the women folk to ensure that they participated in the election for them to really get their 35 per cent political position in the administration. Besides, Obioma's pet projects had impacted positively on many rural women who felt that it was the time to pay her back.

The Commissioner for Information and Orientation Patrick Ugbe attributed the success of Imoke to hard work. Ugbe said, 'It is as a result of his track records of performance. He has had four years and has performed creditably before the eyes of Cross River state. He has opened rural areas and nothing more than victory was expected.'

No matter what, Imoke had the apparatus, the wherewithal, the structure and everything he needed to win the election and it could only have taken God to stop him. But God did not.