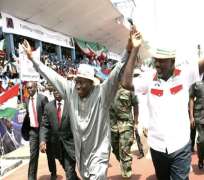 The election was conducted Saturday, February 25, 2012.

Imoke of the Peoples Democratic Party (PDP) polled 451,544 to defeat his closest his closest challenger of the Action Congress of Nigeria (ACN) who polled 31, 026, while the ANPP polled 2, 235, in what many have described as one of Nigeria’s freest and fairest elections to date.

Recall THEWILL had earlier reported that Imoke was set for a landslide victory, according to data from our exit poll.

As he prepares to begin his second full term in office as Governor, President Jonathan urges Mr. Imoke to move quickly to establish a dedicated, purposeful and efficient administration that will help him to consolidate on the laudable achievements of his first term and boost the pace of socio-economic development in the state.

The President assures the returning governor of the continued support, cooperation and assistance of the Federal Government and urges him to work hard to justify the confidence reposed in him by the people of Cross River State by fulfilling their expectations of faster progress and development.

President Jonathan prays that God Almighty will grant Mr. Imoke good health and strength, and even more wisdom and courage as he returns to the service of his people and the nation at the helm of state affairs in Cross River State.