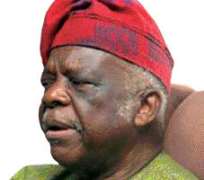 Olusola
From his experiences in conflicts management and resolution across Africa, Ambassador Segun Olusola believes that politicians are more to blame for most of the social unrests Nigeria is facing. The senior citizen, who called for urgent steps to address the rising wave of violence in the country, gave an assessment of its impact on national life. He discussed with Saturday Sun.

Excerpts:
Can you assess the impact these conflicts across the nation have on internally displaced persons in the country?

The upsurge of internally displaced persons as a result of recent uprising across the country has been unprecedented. And now, there are thousands of internally displaced persons in various parts, particularly in the northern part of Nigeria where we are witnessing the insurgence of the religious sects, Boko Haram. The idea that we would support at the African Refugee Foundation is to ensure that they are not made permanently displaced. Let the period of internal displacement be managed by the federal, state and local governments so they don't become permanent refugees wherever the may find themselves.

Can we justify these upheavals in any way?
All of these conflicts and upheavals have been uncalled for. I think our people should learn to manage difficulties surrounding our political development. The difficulties that would lead to people fighting with youth corpers who are mandatory serving their fatherland in any part of the country is uncalled for. Because it has now made it very difficult for youth corps members to accept posting to different parts of the country. Yes, there will be disagreements in times of political crisis, but it must never be allowed to result into the killing and maiming of a fellow countryman particularly, such as we have witnessed this year.

Can you appraise the level of government intervention?

Well, it is commendable but we can say that it can be better. There's need for prompt and adequate response and interventions anytime these emergencies occur. One thing government should always do is to ensure that people who are displaced during the conflicts or crisis are not made to be permanently displaced. Let the period of internal displacement be managed by the local government, state governments and the federal government so they don't become permanent refugees wherever they are'.

I regret to say that I do not have the statistics of refugees in Nigeria now. But, what we are dealing with in Nigeria is not just the refugee population. We're also dealing with internally displace persons. Because without a war, you cannot be having refugees. But internal displacement occurs when a situation like the Boko Haram prevails. Within Nigeria, Boko Haram has pitched Nigerians against Nigerians. So, the people are running from one part of the country to another. These categories of persons are called internally displaced persons. They need to embrace dialogue rather than terror and aggression.

But the conflicts the country is experiencing, which has degenerated into national insecurity is a major disaster in global terminologies. And whatever we can do to reduce it; we should do with every sense of urgency to ameliorate it. And I think we should appeal to politicians to watch what they say, what they do because they in some ways, largely, contribute to the upsurge in the number of internally displaced persons. So, they have to watch their words and actions because one major disaster that occasions a major movement of people from one place to another can result in large-scale refugee production.

How do you mean when you say that those politicians are responsible for the upsurge in the number of refugees in the country?

Refugees don't drop from the sky. Refugees are products of the inadequacies of the society, the conflict situations created by politicians as well as the conflicts that the politicians themselves supervise. That is why we often say that refugees don't drop from the sky. We therefore appeal to all Nigerian politicians from all the states from across the federation to ensure that in whatever they say, or do, they should not encourage physical conflict between one set of people and another that can lead to the movement of people from one part of the country to the other

Because it is from little uprisings that the refugee situation arises. And sometimes, there's no terminal point to the problem of refugees. It may surprise you to know that that refugees from Liberia are still living in Oru refugee camp even as I speak now. Although between the two governments -Nigeria and Liberia- and the United Nations had come to an agreement that the refugees should return to their homes of origin. But Liberian refugees are still in Oru and I do go there to see their children and whatever assistance we can render, we render. So, once the battle begins, once the politician's cause the kind of trouble that they foment and people begin to fight, it does not end in time.

Though many believe these upheavals are politically motivated, there are yet, others who believe they have some religious coloration. Are there things religious leaders not doing or telling their followers?

Religious leaders ought to be advised that any practice in religion that results in the breaking of homes, killing of people, incitement of people should be avoided. Any religion can be propagated; can be practised without force on non-adherents of that religion.

Are you one of those who believe the country is near disintegration as a result of the Boko Haram insurgence and other regional agitations?

If we do not monitor and arrest it now, it can draw us closer to disintegration and precipitate large-scale movement of helpless people, and which will subsequently, result in large-scale refugee situation and internal displacement.

Earlier, you talked about stemming conflicts in order to check hooliganism. What can be done to address this menace?

Children are not born on the road. So, these children don't belong to the street. Every child is born in a home surrounding. And we should appeal to our parents, that no matter how poor they are, they should still ensure to bring up their children in the protection of homes. Every street belongs to a particular community. So, even the head of various communities should take interest in the care of the so-called 'street children'. This should be the case in every local government level.

And parents should ensure that, in their growing up years, children are brought up in homes, specially prepared for them. The moment a child is left only to the streets, to be brought up to make friends, that child is no longer a home child. So I want to do away with this idea of street children. Let us adopt them, bring they home and look after them.

So, are you calling on the community to be more aware of this type of children?

Well, the community must be part of this. They must ensure that the moment a corner is developing in a community where street children abound, parents, all members of the community and government alike should do something about it.