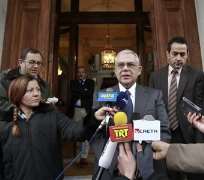 Greece's parliament will endorse a debt swap with private bondholders on Thursday to help reduce the country's debt and secure an international bailout, despite new protests against the tough terms of the deal.

The swap, in which private investors exchange their bonds for lower-value debt, will slice 100 billion euros ($132 billion) off Greece's debt, a vital part of the EU and IMF rescue plan aimed at cutting Greece's liabilities from 160 percent of gross domestic product to 120.5 percent by 2020.

Greece's second bailout since 2010 was approved by euro zone finance ministers on Tuesday, averting the immediate threat of bankruptcy next month but doing little to allay deep doubts about the country's long-term financial and social stability.

The debt swap bill passed the committee stage in parliament on Wednesday as several thousand trade unionists, pensioners and communists marched through central Athens against cuts to wages, pensions and jobs, required by the European Union and International Monetary Fund to trigger the funds.

Doctors and health workers joined the wave of public anger on Thursday, launching a 24-hour strike over pay cuts and calling a protest outside the Health Ministry.

Hospitals were maintaining a minimum level of service.

"We condemn the policy of the government, the EU and the IMF, which is demolishing the state healthcare and killing its personnel," hospital doctors from Athens and the port city of Piraeus said in a statement.

Lawmakers are expected to adopt the debt swap bill in plenary session on Thursday.

The government says the offer must be made to bondholders by Friday and completed by March 12, before a March 20 deadline when 14.5 billion euros of debt repayments fall due.

Private investors holding some 200 billion euros of Greek bonds will take a loss of 53.5 percent in the face value of their holdings.

The legislation says investors get at least 10 days to consider the transaction and creates so-called "collective action clauses" (CACs), which force all bondholders to proceed with the swap once it has won a specified level of approval.

According to the draft law, the swap will go ahead once a 50 percent quorum of bondholders have responded to the offer and the CACs will be activated once a two-thirds majority of that quorum have voted in favor of the swap.

SCEPTICISM
The austerity measures have plunged Greece ever deeper into recession and driven unemployment up over 20 percent. Half of young Greeks are jobless.

The bailout deal buys time to stabilize the 17-nation euro zone currency bloc and strengthen its financial protection against a messy Greek default, which is a long-term threat.

Credit ratings Fitch on Wednesday downgraded Greece further to C from CCC. The move was expected as Greece passes into technical default on its liabilities once the debt swap transaction is completed.

The euro zone, and particularly its northern members led by EU paymaster Germany, are deeply skeptical that Greek leaders will stick to the painful spending cuts and reforms after an election penciled in for April.

Greece must adopt a raft of laws on the austerity package in the coming days to clinch the funds.

Officials from the International Monetary Fund said the lender was weighing up the size of its contribution given that Athens is near the limits of what it is allowed to borrow.

European and IMF sources have told Reuters the lender could contribute 13 billion euros in new money on top of 9.9 billion still unpaid from the first bailout.

The United States, the biggest contributor to the IMF, welcomed the bailout deal, but said on Wednesday that Europe should do more to prevent any risk of contagion.

"We believe that the IMF should continue to play a constructive role in Europe, but IMF resources cannot be a substitute for a strong and credible firewall," Lael Brainard, the U.S. Treasury Department's under secretary for international affairs, said before a Group of 20 meeting this weekend. ($1 = 0.7552 euros)