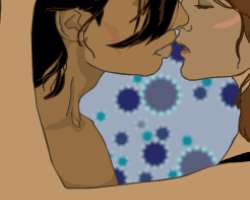 You've messed around. You've made out. But did it cross the line to sex?

That's the question that a new study in the Journal of Adolescent Health tackled. The study asked more than 1,000 teenagers between the ages of 14 and 19 what they'd have to do to lose their virginity and what counts as abstinence.

It's important to know that what you're doing can affect your physical and emotional health, says San Francisco-based sexuality health educator Ivy Chen, who regularly talks to teens about sex and teaches a class at San Francisco State University on healthy relationships.

What Else Do You Need to Know?

"If teens are not given comprehensive sex education or another forum in which to talk about sex, they go from being ignorant teens to ignorant adults," Chen says. "People have different definitions of what behaviors count as 'real sex' and different motivation for having sex. First, we need to define sex and why we have sex for ourselves, and then extend that conversation to our partners."

One question Chen likes to ask teens is, "What will make sex good for you?" She wants to help teens figure out what they need sexually so they can set standards for themselves.

Usually the answers include

* Knowing that you're ready.

Is having sex now in sync with your personal values and goals? Are you ready to be very clear about what you want and don't want to happen? Are you and your prospective partner on the same page about your relationship?

* Having an appropriate partner.

* Having a safe and comfortable place to have sex.

"If you were to plan it, I think you might prefer someplace that's safe, private, and comfortable," Chen says. "Not where you're in a half-drunken state at a party, where you don't have control of the situation, or where you're somewhere in public where it's not safe."

* Having the appropriate protection.

This includes condoms, birth control, and having access to emergency contraception — the morning after pill — if something goes wrong. "Some sex educators have suggested that if a condom is more than an arm's length away, you won't use it," Chen says. "Sex is so wrapped up in approval and lust and fear that a person may not want to risk breaking the mood to step away to get a condom."