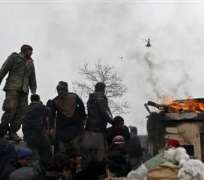 About 2,000 Afghans protested outside the main U.S. military base in Afghanistan on Tuesday over a report that foreign soldiers improperly disposed of copies of the Koran.

U.S. helicopters fired flares to try to break up as many as 2,000 demonstrators who massed outside several gates to the base, chanting anti-foreigner slogans and throwing stones.

Roshna Khalid, the provincial governor's spokeswoman, said copies of the Muslim holy book had been burnt inside Bagram airbase, an hour's drive north of the capital Kabul, citing accounts from local laborers.

"The laborers normally take the garbage outside and they found the remains of Korans," Khalid said.

NATO's top general in Afghanistan attempted to contain fury over the incident, which could be a public relations disaster for the U.S. military as it tries to pacify the country ahead of the withdrawal of foreign combat troops in 2014.

"When we learned of these actions, we immediately intervened and stopped them. The materials recovered will be properly handled by appropriate religious authorities," said General John Allen, head of the International Security Assistance Force (ISAF), in a written statement, as well as in a video released on a U.S. military website.

"This was NOT intentional in any way."
Reuters reporters at the scene said there were about 2,000 protesters.

"We Afghans don't want these Christians and infidels, they are the enemy of our soil, our honor and our Koran," said Haji Shirin, one of the protesters.

"I urge all Muslims to sacrifice themselves in order to pull out these troops from this soil."

Bagram also houses a prison for Afghans detained by American forces. The centre has caused resentment among Afghans because of reports of torture and ill-treatment of suspected Taliban prisoners, with President Hamid Karzai demanding the transfer of prisoners to Afghan security.

Allen did not provide details on the incident.
Winning the hearts and minds of Afghans is critical to U.S. efforts to defeating the Taliban, but critics say Western forces often fail to grasp Afghanistan's religious and cultural sensitivities.

The apology did little to ease anger. The Koran is the holy book of Islam any hint that Western forces are showing it disrespect could deepen resentment over their presence in Afghanistan.

"We want them out of our country now," said Zmari, 30, a protester who has a shop near to the base.

Protests raged for three days across Afghanistan in April last year after a U.S. pastor burned a Koran in Florida.

Eleven people were killed when demonstrators stormed a U.N. compound in the northern city of Mazar-i-Sharif, including seven foreign U.N. workers. Another riot in the southern city of Kandahar left nine dead and more than 80 wounded.