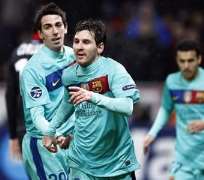 Lionel Messi scored four as Barcelona came from behind to thrash Valencia 5-1 at home, to close the gap on La Liga leaders Real Madrid back to 10 points on Sunday.

Jose Mourinho's side thumped Racing Santander 4-0 on Saturday to put pressure on the champions, who conceded to Pablo Piatti after only nine minutes at the Nou Camp.

World Player of the Year Messi led the fightback with two goals in five minutes to put them ahead by the 27th minute as Pep Guardiola's side responded with some exhilarating football.

Barca twice hit the crossbar before Messi bagged his third in the 76th, and he lobbed the fourth five minutes from time.

Substitute Xavi lobbed the fifth at the end to move his side on to 51 points from 23 games. Valencia were third with 40.

Espanyol were fourth with 33, ahead of Athletic Bilbao in fifth due to their superior head-to-head record, after the Basques scored three times in three second-half minutes in a 3-0 home win over Malaga.

The King's Cup finalists scored with their first clear sight of goal in the 58th minute when Fernando Amorebieta pounced on a loose ball after a corner, and Mikel San Jose headed the second from another corner.

Gaizka Toquero volleyed in the third at the back post in the 61st.

Atletico Madrid were a point behind them in sixth after being held to a 1-1 draw at Sporting Gijon, who had former Spain boss Javier Clemente in the dugout for his debut at the helm.

Adrian Lopez's cross-cum-shot was turned into his own net by Sporting's Roberto Canella in the 20th minute, but the hosts levelled when Sebastian Eguren poked a loose ball past Thibaut Courtois just before halftime.

Levante slipped down to seventh with 32 points after losing an eight-goal thriller at home to Rayo Vallecano who ran out 5-3 winners.

Earlier, Granada's new coach Abel Resino made it three wins in four since he took the helm when his side came back to beat 10-man Real Sociedad 4-1 at home with a double from Ike Uche.

Villarreal's revival under their new coach Jose Molina shuddered to a halt, however, when they were thrashed 4-0 at Real Mallorca.