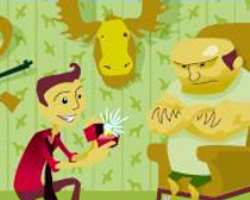 In a return to traditional values, modern would-be grooms are asking parents first for their beloved's hand in marriage

But this was no ordinary marriage proposal.

Last January, over coffee and under fluorescent lighting, Calgarian Chad Hughes asked his girlfriend's parents for permission to marry their daughter.

His girlfriend Tanya Eklund was in Calgary, hundreds of kilometres away, and none the wiser.

"I was nervous and excited," says Hughes, recalling the day he popped the question to his future in-laws.

Before he even asked, Hughes knew Tanya's parents would give him their blessing. Even so, he also knew asking them was the right thing to do, explains Hughes, co-owner of a land acquisitions company.

"I've always thought it was a respect thing towards the parents," says the 33-year-old, explaining his motivation.

Asking permission before proposing went over really well with Tanya's parents, Ginny and Dale Eklund, too.

"I just thought that it was really something because it's something you don't hear about anymore," says Ginny, 63, a retired nurse.

"We appreciated it," adds Dale, 64, a psychiatric nurse, from the couple's home in Wetaskiwin, south of Edmonton. "That tradition -- it's not honoured that much anymore."

Two months later, in March, Hughes officially asked Tanya if she wanted to be his wife.

She said yes. They were married on Sept. 22.

Whether they know it or not, the Calgary couple is on the front line of a re-emerging trend -- asking the bride-to-be's parents for her hand in marriage before actually asking the bride.

Other than finding similar stories, it's hard to determine how many grooms-to-be are

requesting a family's blessing to marry their daughter.

No association documenting this social phenomenon or hard statistics on the trend could be found.

However, a University of Guelph master's student, along with two other researchers, is about to launch a study on heterosexual marriage proposals in Canada. The researcher wouldn't speak about her work as it's in the very early stages.

Anecdotally, however, it's clear this gesture is gaining favour with modern couples.

Wedding planners and others in the wedding business -- a $4 billion a year industry in Canada alone -- say asking permission before proposing is happening more frequently these days.

In one recent high-profile

analyst Henry Hager reportedly met in private with the president to ask for the big guy's blessing before proposing to first daughter Jenna Bush on Aug. 15.

"To be honest, I don't know quite what to make of it," says Calgary wedding planner Lisa Hanslip of this emerging

Hanslip, who's been in the planning business for 15 years, has noticed a jump in pre-proposal meetings between the prospective groom and his would-be in-laws. Hanslip says she usually hears about it

Yet, she says it's hard to find a thread tying these modern grooms (and brides) together demographically.

"There's not a lot of commonality between the couples."

Hanslip says her clients who have gone the traditional

proposal route have been both young, in their early 20s, and also more mature. In one

instance, the groom was well into his 40s and had been with his bride, also 40-something, for two decades. They'd also lived together.

The groom asked her family for their blessing before asking his bride to marry him, Hanslip says.

At wikihow.com, an online how-to guide written by users, a section is devoted to helping the would-be groom ask his girlfriend's parents for her hand in marriage. Tips include preparing for a 'no,' dressing the part and keeping the nerves calm, among other suggestions.

Fort Worth, Tex.- based wedding proposal consultant Michael Bloomberg says "many" of his clients have gone this pre-proposal route with the bride's family. Similar to an event planner, Bloomberg helps guys plan and then execute the perfect wedding proposal. He charges between $85 and $125 US per hour or offers a $425 US proposal package.

In fact, before Bloomberg takes on a new client, he wants to know if they have asked the would-be bride's family for their blessing.

That question is all about the larger picture -- getting to know the couple a bit better and making sure when it comes down to it, the woman will say yes, Bloomberg says.

For his part, Bloomberg doesn't think the act of asking is the guy's idea.

"I think it's more of a directive from the girl," he says.

"It does seem to be a big trend right now," adds Kathie James, a Calgary-based wedding planner for the past 30 years.

James says wedding traditions have a tendency to be cyclical.

When it comes to weddings, she has seen traditions come and go and come back again.

Everything old is new again, it seems.

Asking for the bride's hand in marriage comes from the

Roman custom of the joining of hands. The groom would give the father a coin in return for his daughter's hand.

Marriages were a contract between families, not couples.

Asking permission before proposing was a tradition brought over to North America with the colonists. As modern marriages (think 19th century) moved toward a love match rather than a family match, the custom of asking the father's permission lost favour.