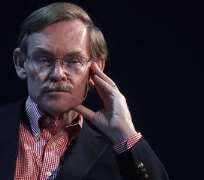 World Bank President Robert Zoellick said on Wednesday he will step down in June and Washington pledged to put a replacement candidate forward within weeks for a job that has always gone to an American.

The Obama administration said it would open the process to competition, marking the first time it has shown willingness to loosen its grip on the world's top development lender.

Zoellick took the reins at the Bank in 2007 after a staff revolt pushed out Paul Wolfowitz, and he moved quickly to return the institution's focus to alleviating poverty.

Developing countries have for years pressed for a greater voice in leading global financial institutions and are likely to stress the importance of a competitive process, but the United States is still widely expected to retain its hold on the job.

"It is very important that we continue to have strong, effective leadership of this important institution, and in the coming weeks, we plan to put forward a candidate with experience and requisite qualities to take this institution forward," U.S. Treasury Secretary Timothy Geithner said in a statement.

While Geithner called for an "open and expeditious process," analysts say Washington can ill afford to give up the post without risking the U.S. Congress cutting funding for the Bank.

UNDECIDED ON FUTURE
In an interview with Reuters, Zoellick said his decision to leave on June 30 at the end of his five-year term was his own and was not due to pressure from the Obama administration.

The former U.S. chief trade negotiator and deputy secretary of state dismissed speculation he would join a Republican presidential campaign as "not true," saying only that he would decide what to do next once he leaves the World Bank.

"It really was my own decision," Zoellick said. "My personal sense is it's time to move on and I think once you feel that way you shouldn't stay."

Zoellick, who discussed the selection process with the board in a two-hour meeting on Wednesday, said the first step was for the board to call for nominations. "An open process is important," he said.

Speculation has been rife over who might take the job when Zoellick departs. Possible U.S. candidates include Secretary of State Hillary Clinton and former White House economic adviser Lawrence Summers, but the State Department said Clinton would not be taking the job. "She has said this is not happening," spokeswoman Victoria Nuland said.

Emerging market and developing countries have campaigned hard in recent years to break Europe's grip on the top position at the International Monetary Fund and the United States' hold on the presidency of the World Bank.

Officials from large emerging economies like Brazil said on Wednesday the selection process for Zoellick's successor should be based on qualifications and not nationality. However, they acknowledged that given U.S. congressional pressure the job will probably remain in the hands of an American.

"I think it ought to be (an American) given the balance between that and the IMF and the interests that we have right now," said Senate Foreign Relations Committee Chairman John Kerry, a Democrat from Massachusetts.

Senator Richard Lugar of Indiana, the committee's top Republican, echoed that sentiment: "Ideally I would like to see an American replace him ... That would be my preference."

Nancy Birdsall, who heads the Center for Global Development in Washington, said that while the United States was committed to an open process on paper, domestic politics necessitated a American successor.

"The election year timing puts the White House in an especially unenviable position. There is a risk that the World Bank could become a highly partisan, U.S. hot-button issue, as the UN has too often been," she wrote in a recent blog.

STEADY AT THE HELM
When Zoellick took the job in July 2007, he turned the attention of the Bank to a brewing food and energy price crisis that was stoking social unrest in the poorest parts of the world.

As the bank looked for ways to help, the global financial crisis of 2008 threatened to undermine more than a decade of strong growth in emerging and developing countries.

Under Zoellick, World Bank lending increased sharply to $44 billion in fiscal 2010 from $13.5 billion in 2008, reflecting the increased development needs of fast-rising countries in Asia, Africa, Latin America and the Middle East.

Zoellick also won approval for an $86.2 billion increase in the Bank's general resources. It was the first increase in more than 20 years. He championed more voting power for emerging economies and convinced China, Brazil and others to contribute more funding.

Despite budget strains in the developed world, Zoellick lobbied for and secured more than $90 billion in pledges to replenish a separate World Bank fund for the poorest countries.

In an effort to modernize the World Bank, he has given a greater voice to emerging economies. He has also championed the need for better governance in regions such as the Middle East, where street protests toppled dictators in Tunisia, Egypt and Libya.