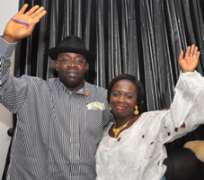 • Bayelsa State Gov-elect, Mr. Henry Seriake Dickson with his wife, Rachael, celebrating their victory at the polls in Yenagoa

In the final results released by the Returning Officer, Prof Joseph Ajienka, the Vice- Chancellor of the University of Port Harcourt, Dickson polled 417, 500 votes to beat his closest rival, Dr Imoro Kubor of the Change Advocacy Party ( CAP) who polled 22,534.

Ajienka, after all the party agents had signed the results, declared that having satisfied the constitutional requirement by scoring the highest number of votes, Dickson Governor-elect. However, there was a mild disagreement before the results was announced as agents of the other political parties complained that the results should have been announced before they signed them.

They also kicked against the decision of the Returning Officer not to disclose the total number of registered voters and votes cast.

At the residence of the Governor- elect along Opolo Road, it was wild jubilation as his supporters that have already prepared for a victory party, broke into songs.

Sources said arrangements are in place for the inauguration slated for tomorrow after INEC would have presented him with the Certificate of Return.

The run-up to the election has been tensed just as the campagins in the history of the oil rich state. At the last count, not less than six court ex-parte motions were granted by various courts in Abuja and Yenagoa. About seven are still pending in courts. And at least, one politically-related explosion was recorded on Sagbama bridge on the eve of a planned grand flag-off rally for Dickson. The stage for the battle royale was set when uncomplimentary security reports on the ex-governor, Timipre Sylva forced the ruling PDP to disqualify him from participating in the primary alongside four others. But while the others took the disqualification their stride, Sylva resisted it and embarked on an elaborate media, and legal war of attrition.

He enlisted the support of his colleagues in the Governors Forum, especially the ones from the South-South. Their efforts to persuade President Goodluck Jonathan to change the equation, failed. While Jonathan strove to insulate himself from the festering crises, voices from the Wadata head-quarters of the party, however, justified Sylva's exclusion from the primary. The PDP's Acting Chairman, Alhaji Kanu Baraje, in an interview with journalists in Ilorin, Kwara State capital in December 2011, pointedly said Sylva was dropped from the governorship race on account of security allegation.

Jonathan's remarks and that of the former Chairman of the Board of Trustees of the party, Chief Tony Anenih, at the PDP rally in Yenagoa a week ago put more fillip to the raison d'etre of the ex-governors rejection. 'Everybody knows that in our society, we need development. I was second-in-command to Alamieyeiseigha. One thing I remember is the Tower Hotel. It was not my dream, but it was conceptualized under the Alameiyeiseigha administration. He discussed it with the contractors, it was supposed to be a five star hotel that would attract people from all over the world. But now, it is a monument of disgrace. One thing I know that God is with Bayelsa people.

Turning to Governor-elect, Jonathan said: 'Dickson, you brought people from Abuja to present flag. The only thing I want to do is to tell you that sometimes ago, I was in Bayelsa and the people stoned the governor. I was here and you must work hard for Bayelsan not to stone you. The day, they stone you, I will follow them to stone you.'

With the Supreme Court adjourning the appeal suit filed by the PDP and which Sylva cross - appealed to April, it is widely believed that unless an influential voice calls for restraint, the face-off may throw up a dangerous seed of politics in the state.