Blackberry Out At U.S. Climate Agency, Iphone In 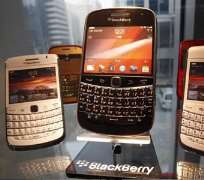 Research In Motion's BlackBerry smartphone has struggled to win over U.S. consumers but the Canadian company has long been able to rely on the loyalty of corporate and government clients who depend on its secure email. No more.

The National Oceanic and Atmospheric Administration, a U.S. federal agency that studies climate and the environment, plans to replace some of its employees' BlackBerrys with Apple iPhones and get rid of the servers that power RIM's smartphones by June.

"It all comes down to economics," Joe Klimavicz, NOAA's chief information officer, said in a phone interview on Friday. "I've got a lot of pressure to cut our operating costs."

RIM charges a fee for use of its servers and data centers, which compress and encrypt email and other sensitive data. The company's early success was due to a reliance on BlackBerry smartphones by lawyers, bankers, politicians and bureaucrats.

But with budgets under pressure and competitors improving their security bone fides, BlackBerry is no longer the only game in town.

Klimavicz said NOAA's move was made possible after it switched its desktop-based software to Google Apps for Government last December. Another U.S. agency, the General Services Administration, has also moved to Google Apps, Klimavicz said.

Google's enterprise business offers Web-based versions of word processing, spreadsheet and other common software applications in a direct challenge to Microsoft. For a set price Google includes mobile-device management capabilities similar to what RIM offers for its BlackBerrys.

When Google's mobile management is coupled with Apple's tightly controlled software, NOAA can enforce password policies and it can control who can gain access to what data, which is a major concern for a range of government bodies and corporations.

Klimavicz said that in the future his agency will be able to use devices using Google's Android mobile software, but that it would have to approve each on an individual basis.

For now, the agency will buy iPhones to replace at least some of the 3,000 BlackBerrys used by its workers and is also using a small number of iPads, he said.

Klimavicz's office oversees annual spending of around $600 million on information technology. He declined to specify how much money the move away from RIM would save.

In response to queries, RIM said its security remains unmatched and pointed out that its latest operating system for smartphones and the PlayBook tablet computer have received certification from U.S. and Canadian authorities.

"RIM continues to work closely with its more than one million government customers in North America who rely on the unmatched security of the BlackBerry platform," spokeswoman Tenille Kennedy said in an email.