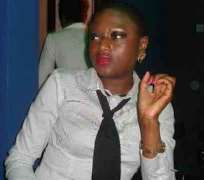 Although details are sketchy for now,but report reaching Nollywoodgists.com confirmed that Susan Yusuf, popularly known as Susy Q, the lady who owns SQ lounge and was recently in the news about ending her Jonzing club partnership with D'Prince, was stabbed to death at her flat at 1004 flats in Victoria Island on Friday February 10,2012.

We gathered that Suzy Q was allegedly stabbed to death at her flat on the 6th Floor of D Block, 1004 flats.

According to source, the duo were embroiled in a heated argument when this unfortunate incident happened.

We learnt the man who killed her in his bid to escape he jumped down from the balcony and died too.

May her soul rest in peace...amen. The man who allegedly killed Suzy Q...pic taken at the scene of the crime