BOKO HARAM: A RELIGIOUS TERRORIST SECT KILLING IN THE NAME OF 'GOD' 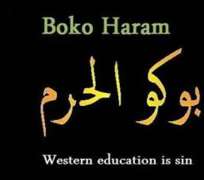 The past three years have seen a surge in violence by Jama'atu Ahlis Sunna Lidda'awati Wal-Jihad, which in Arabic means People Committed to the Propagation of the Prophet's Teachings and Jihad. The group popularly known as Boko Haram [loosely translated as western education is sin] is responsible for dozens of shootings and attacks with improvised explosive devices, including suicide tactics. Boko Haram is a terrorist group loosely modeled on Afghanistan's Taliban, which says it is fighting to install sharia law across Nigeria. In a message posted on a YouTube, the leader of the group Imam Abubakar Shekau justified all the killings as divine as commanded by his “Allah.”

Religious terrorism is not new and is one of the oldest phenomena in human history where people kill in the name of God or in the name of religion. David Rapoport, one of the foremost experts in counterterrorism argues that “each religious tradition produced its own kind of terrorist, and sometimes the tactics within a tradition were so uniform that they appear to a form of religious ritual.”

For religious terrorist, religion is the basis and imperative for their action. Of course, to the perpetrators, violence is one of the divine obligation and sacramental toward fulfilling the tenet of their religion. Therefore, it is wishful thinking for someone to claim Boko Haram will fizzle out of existence very soon. The “religious wave” of terrorism resurfaced in 1979, and may last for a generation before another wave will emerge.

The reason for this analysis is to make people understand that “religious terrorism” is not about Nigerian Muslims; it is a global phenomenon. Terror is deeply rooted in our modern culture as a political strategy but not an end. The tactics only depend on the political objective of the group and the specific context it faces. This explains the difference between the Movement for the Emancipation of the People of Niger-Delta, (MEND) and the Boko Haram.

According to Rapoport, “the ‘Anarchist wave’ was the first global or truly international terrorist experience in history; three similar, consecutive, and overlapping expression followed.” In 1920s, the “anti-colonial wave” emerged and sustained for forty years before giving way to the “New left wave” that lasted for more than fifty-years, and “religious wave” returns in 1979.

Besides, religious and ethnic identity often overlaps; therefore, Nigerian Christians should not see the action of Boko Haram as either Christians versus Muslims or Northerners against Southerners. In reality, Boko Haram is not about “Sharia”; it is about the struggle for control of power in Nigeria but it is suitable for the perpetrators hidden under the cover of Islam to mobilize support. These people are not Muslim; most of them are drug addicts, adulterers, and rapists. They do everything contrary to what is written in the Koran, including the killing of women and children. This is not Jihad; it is a struggle for power. Terrorism is about power—the pursuit of power, the acquisition of power, and the use of power to achieve political change.

The root of today’s terrorism could be found in ancient history. Terrorism and religion share a long history. Bruce Hoffman, an expert in counterterrorism at RAND Corporation, Washington DC claims that “the imperative of religion for terrorism is the most defining characteristics of terrorist activity today.” The connection between terrorism and religion is not new and could be traced to a millenarian Jewish sect called “Zealots” that fought with Roman Empire in AD 66 – 73. The Zealots action which is similar to what we see in today’s terrorist was to draw attention to their cause by publicly executing their target in a crowded marketplace. Their targets are always Roman legionnaire or a Jewish citizen who had been judged by the group guilty of betrayal.

Furthermore, the word “thugs” emanated from the activities of notorious cult sects that operated in the seventh century till mid nineteenth century in India. The group terrorized Indians, killing many innocent people for ritual purposes to worship the Hindu goddess and Kali.

Another example is a Muslim Shi’a Ismaili sect that operated between A.D 1090 and 1272. This sect of religious extremist fought against the Christian crusaders attempting to conquer the present day Syria. According to Hoffman, “violence for the Assassins was sacramental act, a divine duty, commanded by religious text and communicated by clerical authorities.”

In conclusion, religious terrorism is one of the most difficult forms of terrorism to curb because of the motivation which the practitioners always claimed to be divine duty or sacramental act. Today, there are many terrorist organizations that are motivated partly or in whole by religious authority. Of course, religious imperative for terrorism is the most important defining character of the terrorist activity of the present age. They all share the same ethos of self-sacrifice and suicidal martyrdoms. Examples of such organization are Ku Klux Klan (KKK) in the United States, Aum Shinrikyo (ã‚ªã‚¦ãƒ  çœŸç†æ•™) in Japan, Kahena Chai in Israel, and Boko Haram in Nigeria

Oludare Ogunlana, a Security Analyst and Member of International Association for Counterterrorism and Security Professionals writes from Baltimore.