T-R-A-G-E-D-Y: Sheep Gives Birth To Half Human, Half Sheep 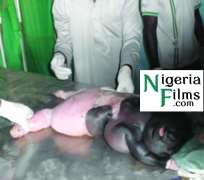 On Monday, January 22, 2012, doctors and staff of Fakon Idi Veterinary Clinic, in Sokoto metropolis were hit with amazement when a sheep was delivered of a monster-like creature.

According to what we gathered, the sheep was unable to give birth properly, hence, it being taken to the veterinary clinic.

Information has it that the mysterious occurance attracted lots of on-lookers, who demanded the sheep owner to be probed, claiming the sheep must have been had sex with before giving birth to half human.