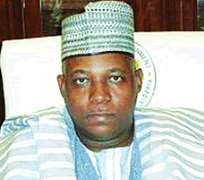 •  Shettima
Apart from 2007, every governorship contest in Borno State, between the ANPP and PDP, went from the election tribunal up to the Appeal Court, which before now was the final arbiter. Interestingly too, apart from 1999, where the late Kachallah (who represented the older generation) slug it out with the younger Ambassador Baba Ahmed Jidda, and later in 2003 against Sheriff, governorship contest in the state, since 1979, have always been among politicians in their 30's and 40's.

This explains why Mohammed Goni, who flew the PDP's flag in 2011, became the first civilian governor of the state at the age of 37, in 1979. But he lost the bid to return in 1983, in spite of the transformation witnessed by the state, under his first four years.

The decision to field him again in 2011, when he was already in his 70's, against a younger Kashim Shettima of the ANPP, who was in his 40's, was viewed by many, as an attempt to take the state 30 years back, at a time when even global power game indicates that younger generation is being encouraged to lead their countries into the new century, leaving the older generation to play the role of statesmen and advisors.

In the end however, and like every other governorship election in the state since 1999, ANPP floored PDP, from where the battle again shifted to the courts. But none of the election legal battles, ever assumed the dimension, the current one is assuming.

The ruling of the trial tribunal has been arrested twice. The first came by way of an interlocutory order, on the eve of the trial tribunal's judgment. The second, which also came barely 24 hours to the tribunal's judgment, came through a verbal administrative order, from the acting President of the Court of Appeal, PCA, Justice Dalhatu Adamu, disbanding the panel of judges.

While the first arrest was quashed by the Supreme Court, the second was quashed by PCA, himself, as he again reversed himself within 24 hours, of arresting the judgment. However, when the Supreme Court was vacating the first order of arrest, its ruling was unambiguous to the effect that 'no court has the powers to halt proceedings or arrest the ruling of a tribunal in an election matter,' because according to the apex court, election litigations are time bound.

It was apparent that, the PCA might have been misled into disbanding the tribunal, thus making an equally hasty reversal of his order. Till date, no reason was given for the arrest and subsequent reversal of the arrest. But the reversal may no doubt have saved the judiciary another big embarrassment, as the disbandment had tended to set a dangerous precedent to the court hierarchy; in which a court of lower jurisdiction overrules that of a higher jurisdiction.

The tribunal continued its sitting and by November 12, it dismissed the petition filed by the PDP and Goni, its candidate, challenging Shettima's election as governor. In a unanimous judgment, the tribunal, headed by Justice Sani Adamu, said the petition was abandoned by the petitioner since August 2011, when he failed to file the requisite application within the stipulated period for the pre-hearing notice.

The tribunal held that 'a situation where the petitioner failed to bring an application for the issuance of a pre-hearing notice form amounts to an abandoned case.' It also recalled that the petitioner's ex-parte motion filed on August 11, 2011, for the pre-hearing notice had earlier been dismissed by the tribunal on the grounds that it lacked competence as it was initiated without due process.

Although, the tribunal agreed with the petitioners that they had the right to ask for an extension of time to file the application, it noted that the request 'must be filed within the time frame,' adding that such a request could only be granted according to the provisions of the Electoral Act 2010 (as amended), which only allowed such an application under extreme circumstances.

The tribunal which sat throughout in Abuja, after the initial reluctance by the PDP and its candidate to relocate from Maiduguri, following the tensed security situation then, further ruled that under the Electoral Act 2010, the tribunal has no discretionary power to exercise in respect of Paragraph 41 (1) of the First Schedule, which states that 'no application for extension of time shall be taken.'

Justice Adamu, who read the judgment on behalf of other members, said that 'It is our humble opinion that this tribunal is not empowered to use discretion in this circumstance.' Although, the decision was handed down barely 24 hours to the expiration of the 180 days stipulated by law, within which to dispense with the case, Goni and the PDP did not hesitate to challenge the decision of the tribunal at the Appeal court.

The Appeal court, on December 24, 2011, upturned the decision of the lower tribunal and upheld the appeal of Goni and the PDP, saying it was meritorious, and ordered that a fresh panel be empowered to hear the petition. The five-man panel led by Justice Mohammed Ladan Tsamiya in a unanimous judgment read by Justice Mojeed Owoade dismissed the preliminary objections of the respondents (Shettima and ANPP) and held that the appeal brought by Goni was meritorious.

Earlier, counsel to the respondents urged the court to dismiss the appeal on grounds that it lacked merit and was also incompetent. He asked the court to strike out the appeal and dismiss it on two main grounds of objection, 'the incompetence of the appeal and the hypothetical nature of the appeal itself.' He argued that hearing the PDP appeal 'would serve no purpose now' as the constitutionally stipulated 180 days period provided for the conclusion of election petitions had already elapsed.

But even when the Supreme Court is yet to deliver judgment, the ANPP lawyers are already raising an alarm that the acting PCA, has gone ahead to empanel new set of justices to retry the petition. One of them disclosed to Daily Sun on Tuesday that they were shocked to hear that a new panel has been constituted to hear the case when the governor's appeal is still before the Supreme Court and is almost due for judgment.

The lawyer noted that the case has been characterized by confusion all through, wondering how the Appeal Court could order a retrial to proceed before the Supreme Court rules on the matter, in less than eight days from now.

The crux of the appeal before the Supreme Court is hinged on the constitutional provision of 180 days as stipulated by Section 285 of the 1999 Constitution as amended, within which to dispense with an election petition. This period, according to counsel to Shettima and ANPP, has elapsed.

They further argued that the PDP petition filed on May 17, 2011, and its life span ended on November 13, 2011, a day after the first tribunal delivered its ruling. Shettima and ANPP also argued that Goni and PDP appealed against the ruling of November 12, 2011 and formulated their grounds of appeal from its ruling of August 10, 2011 which the Supreme Court had declared statute barred in its ruling of SC/352/2011, SC/333/2011, SC/352/2011. It is therefore the considered opinion of counsel to Shettima and the ANPP that the Appeal Court erred in the face of the law, by upholding Goni's appeal and ordering a retrial.

As it stands, it is only time that will tell, whether or not the tribunal will wait for the decision of the Supreme Court, before going ahead to commence the retrial, as ordered by the Appeal Court. What is however certain for now is that once the Supreme Court decides in favour of Shettima and the ANPP that will be the end of the legal battle and the PDP will have to wait again till 2015, to stake its pride. But if it decides otherwise, then it will signal the commencement of another round of legal fireworks, which will ultimately end at the Supreme Court again.