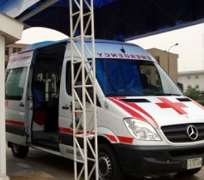 ABUJA, February 08, (THEWILL) - The House of Representatives Wednesday urged the Federal Ministry of Health in conjunction with the Federal Capital Territory Administration [FCTA] and the Federal Road Safety Commission [FRSC] to set up Mobile Emergency Response [MER] Units at strategic points along the three major routes leading into the FCT.

It said the MER unit must be adequately equipped with the necessary medical requirements to enable the Units discharge their functions effectively.

Adopting a motion brought by Yakub Abiodun Balogun at the plenary session presided over by the Deputy Speaker, Emeka Ihedioha, the House expressed the need for the facility arguing that “these roads are always congested and sometimes totally blocked especially during peak hours.”

Balogun had in his submission expressed concern over the multiple cases of accidents on the roads as a result of high vehicular traffic, arguing that “most times when such accidents occur, many deaths are usually recorded and several people sustain serious injuries.”

“Most of the deaths are caused as a result of accident victims not receiving prompt medical attention,” he said.

Also in another motion introduced by Abiodun Awoleye, the parliament mandated the Committees on Appropriation and Aviation to ensure that the funds needed for the rehabilitation and upgrading of the Ibadan Airport is included in the 2012 budget.

Awoleye had raised alarm on the inadequate security, lack of functional modern x-ray machine to screen passengers and luggage among others obsolete equipment at the airport which he said was constructed and formally commissioned by the former Senate President, Dr Joseph Wayas on June 24th, 1983.

“Perpetrators of criminal acts can infiltrate the porous security thereby posing a threat to the security of about 400 air passengers that travel through the airport on a daily basis,” he said.

The parliament also mandated the committees on Education, Science and Technology, Commerce, to establish the volume of researches, inventions, discoveries abandoned in research institutions across the nation.

The Committees are to report back to the House within four Weeks.