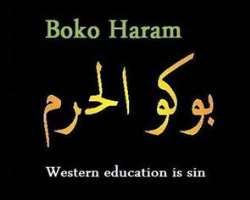 Don't negotiate, negotiate which way to go —Mr. President.? With one side of the mouth of the Presidency we hear from the President's Chief of Army Staff, Lt.-Gen. Azubuike Ihejirika that the Federal Government must not engage in negotiation with the Boko Haram sect and that the use of pure militaristic approach is the ultimate way out.

On the other side of the presidential cavity is President Goodluck Jonathan telling the world that the Nigerian government would dialogue with the unyielding Islamist organization, Boko Haram, if they are open with their demands and their identifications.

With this clear lines of governmental mix-up, hundreds of lives are being lost constantly, continuously and painfully.

The current intelligence operations and noise making from some in authority, and the mostly reactive stance on the terror problem, do not seem to have had a marked dent on the rising level of violence from these extremists.

There is certainly a cultural dimension to terrorism, and terrorism in America, and in the Arab world have successfully used their peculiar cultural tools to ward off dangerous behaviors and acts from dreadful groups like the Boko Haram.

Given that terrorism is the organized use of terror, especially as a means of oppression, our counter-terrorism approach must adopt wider acknowledge of societal happenings and become equipped with commercial, egalitarian, scientific, social, and cultural elements that run deep in our multi-ethnic, multi-linguistic and poly-religious society.

The country is almost and slowly being torn into pieces, just as represented in the multiple pieces that make us operate and function as a multi-cultural society.

We do not fundamentally know, speak or fully understand each other's history or culture, which makes it more unusual to movingly copy and utilize an alien culture like that of Euro-America; using it as a model for offensive or defensive tactics to the Boko Haram fanatics.

The White man's approach is always and very direct—employ the power of shock and awe, that is rapidly dominate the terrorists in a spectacular manner and use every force to paralyze them.

Even if we were to bring in the most ruthless form of military technology to attack the terrorist in Northern Nigeria mostly, the agents and participants of Boko Haram will face us readily as this is part of their vision and , yearnings. And certainly, this will be the speediest way to provoke disunity and other related divisions in the nation.

Even the major international and global powers like the United States of America, Russia, China, France, Britain and Germany will most likely support such a divide and separation.

The Presidency and the entire national security management should know that Nigeria's form of terrorism experience is categorically a religious terrorism.

Usually the aim of religious terrorists is to achieve various forms and levels of political, economic, educational and sacred conclusions.

The Boko Haram on behalf of many unknown and known committed stakeholders may actually be fighting for national independence. Those who are participating in these terrorist acts in Nigeria, in a much more leadership, silent and faceless manner are fantasying to regain or develop a type of Northern –based financial resources, human capital, wide political influence and widespread military power.

Directly and indirectly there are forms of spiritual, conscious, unconscious, and psychic as well as financial efforts and investment aimed at obliterating those perceived as 'Not Part of Us'.

The longer the Boko Haram combativeness and disturbances go on the worse it will be for the nation in terms of peace and security.

So far, these terroristic acts and behaviors are continuously threatening the entire psychological and social make up of our communities.

For now, it appears that only a small minority of Muslims around the nation is openly supporting or is actively involved in terrorist attacks. As such there is hope in finding a way to control our form of terrorism.

Psychologically and from an African perspectives, it appears clear that culture which is a way of living, is the main counter measure that could specifically tap into the general and dutiful convictions of the terrorists. The government should not attempt to even use religion as a way to change the terrorists ways as religion is very rigid in humans.

As such, all efforts should focus on refocusing these terrorists from the point of language (verbal and non-verbal), behaviors, habits, and conducts. We have to in a de-legitimized manner recondition the terrorists and their cultural environments in regards to such beliefs as being ready for martyrdom or profound suffering, being committed to the feeling that suicide is acceptable, and that they need an authorization from another human to in order to live or die.

From our point of cultural correction, they need to understand that they do not have to perish to defend the lands and the religion of the North, as there are other ways to do this; other than the use of kidnapping, burning, or killings.

We must use all available mediums (e.g. the substantial use of newspapers, electronic media, street graffiti, wallpapers, and other similar methods to de-culture influences and acts of terrorism within our northern areas and across the nation. A very important cultural element that is essential in an tense environment is a woman who usually plays an indispensable role that help prevent escalating situations. A woman, by psychological definition, presents as one who generally has a calming effect in hurt environ and in front of a potentially angry or violent man. However, since the status of woman in Islam constitutes images of lowliness or “less than' to men their use should be done with caution.

The Boko Haram elements are quiet aware that religion in a much more natural way helps them take cover as they justify their conducts morally, but the nation as a whole could use culture as an collective instrument to generate a set of new beliefs that will make terrorism strange and unwelcome to potential recruits, activist youths and vulnerable adults, This we will do in combination with the smart use of our armed forces and other security actions.

John Egbeazien Oshodi, Ph.D., is a Forensic/Clinical Psychologist and the Secretary-General of the Nigeria Psychological Association (NPA), Abuja. [email protected] 08126909839