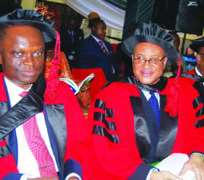 L-R, the awardees, Ihejiaha, Utomi and Agbakoba
For one week beginning from January 23, the University of Nigeria, Nsukka (UNN), shone like a galaxy as it celebrated its 41st convocation. Ceremonies lined up for the convocation came to a grand and solemn end on Sunday, January 29, with an inter-denomination church service.

The convocation programmes kicked off on Monday, January 23, with a press briefing by the Vice Chancellor, Prof Bartho Okolo. It was followed by a public lecture delivered by Dr. Shevel, principal, Galilee Institute, at the Princess Alexandria Unity Hall and Theatre, on Tuesday, January 24.

The events attracted large crowd of guests, especially members of the university community and their friends. While the convocation cocktail was hosted by the vice chancellor at the quadrangle of the CEDR, the prize night was staged at the Alexandria Unity Hall on the same day Obasanjo delivered the convocation lecture.

Prior to the events, a sophisticated security master plan was articulated and designed as pro-active measures to ensure the security of life and property in the university allegedly threatened for attack by the Islamic sect, Boko Haram. At both the entrance and exit gates, the university security officials assisted by government security operatives scanned incoming and out-going vehicles for destructive objects. Entry into the institution was facilitated by a design that allowed private and commercial vehicles to use only designed routes.

Former Commonwealth Secreatary General, Chief Emeka Anyaoku, was chairman of the convocation lecture. He sounded a note of warning on the consequences of the current security challenges in the country: 'In my view, there is added urgency to the need for national conference of representatives of Nigeria's diverse people, to discuss and reach consensus on a new structure of governance that will address the root challenges increasingly posed to the cohesion and stability of the Nigerian state.'

He stressed the need for Nigeria to stay together. He appealed to northern leaders to convene a meting and discuss how to assist the federal authorities to douse the 'flames that if not checked, will with time, burn much wider in the country.' He, however, commended the vice chancellor for the massive infrastructural development seen on the campuses of the university.

Obasanjo in his lecture, said although much have been done by government in the education sector, much was yet to be done if the country was going to meet the objectives of the MDGs and vision 20-20-20. He went onto canvass an arrangement whereby teachers and schools would be rewarded according to performance, arguing that it would check indolence in the sector and promote efficiency.

He commended the UNN VC for the ongoing massive transformation in the university. He expressed optimism that before long, those resisting change in the university, would begin to appreciate the need for change.

The vice chancellor restated his commitment to make the university a world-class citadel of learning and one of the best in Africa. He regretted that lack of fund was militating against his administration's efforts to achieve this noble objective. He appealed for assistance from governments, friends of the university and the alumni.

Highlight of the occasion was the presentation of honorary awards to some prominent Nigerians among whom were Fidelity Bank Managing Director, Mr Reginald Ihejiahi, Mr Olisa Agbakoba and Prof Pat Utomi.