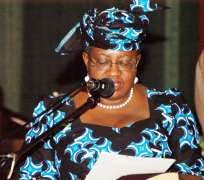 It has equally advised the Coordinating Minister for the Economy and Minister of Finance, Dr. Ngozi Okonjo-Iweala to desist from making further ‘unguided statements’ on sensitive national issues.

The lower House gave this order at Tuesdays plenary after adopting the recommendations of the Hon. Ndudi Elumelu led joint committee, set up last year to investigate the federal government’s withdrawal of these agencies from the nation’s ports and borders.

The Minister had on October 10, 2011 announced the withdrawal of the agencies from the ports and borders necessitating the constitution of a joint committee on health, commerce, industries, narcotics, drugs and financial crimes to investigate the desirability or otherwise of the order.

While considering the recommendations of the committee, the House directed that NAFDAC, NDLEA and SON should remain at the Nigerian Ports and borders in order to enable the agencies discharge their statutory duties. According to the House, “the withdrawal of these agencies from the ports and borders has negative effects and implications to the Nigerian citizens.”

Elumelu had told the House that the committee found out in the course of its investigation that the minister did not consult the President before issuing the directive withdrawing the agencies and recommended she should be cautioned; a recommendation, which was duly adopted.

The House recommendation reads “That the minister of finance should be advised against making unguided statements on sensitive national issues since it was discovered that she did not seek the approval of Mr. President before making the statement as at October 10, 2011 when she announced the withdrawal of the National Agency for Food, Drug, Administration and Control (NAFDAC), Standards Organisation of Nigeria (SON) and other agencies from the ports and borders.”

Meanwhile, the House has further given the joint committee another two weeks to investigate the alleged importation of five containers containing illicit goods from Brazil, which were surreptitiously brought into the country at the time these agencies were evacuated out of the ports.

Hon. Uzor Azubuike (PDP, Abia) had drawn the attention of the House to the alleged complicity in the order sacking the three agencies from the ports and borders to the insidious clearance of five containers whose contents and where about are yet to be determined.

He alleged that the order withdrawing the agencies was issued to pave way for the entrance of the containers.

“I sponsored the motion because it was alleged that the directive was targeted at allowing certain cabals get some things into the country unchecked. This has to be investigated by the House,” he pleaded.

Hon. Elumelu collaborated the allegations submitting that the joint committee found out that the said five containers were actually brought into the country at the time, although the manner of their clearance and the contents are still hazy.

According to him, “as soon as they were doing this (withdrawing the agencies from the ports), it was reported that five containers filled with dangerous substances were imported from Brazil into the country,” Elumelu told the House.