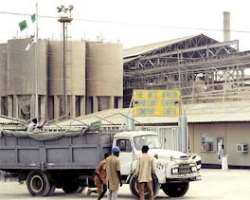 Despite the fact that the Ajaokuta Steel Company Limited, Kogi State, is almost comatose, its workers will earn N4.584bn as salaries this year.

The amount is 99.35 per cent of the N4.614bn allocated to the company in the 2012 budget. The sum is under the heading of recurrent expenditure. Only N30m is allocated for capital projects.

While the recurrent expenditures for all the other agencies under the ministry were broken down into personnel and overhead costs, those of Ajaokuta Steel and the National Iron Ore Mining Company are strictly personnel costs.

The firm, which was originally built to produce steel and iron rods, has the highest budgetary allocation under the Ministry of Mines and Steel Development. The Nigeria Geological Agency is second with N2.754bn allocation.

The ministry itself got about N2.25bn in the 2012 budget made up of N1.36bn recurrent expenditure and N890m capital expenditure.

Out of the N178.69bn allocated to the Council of Nigerian Mining Engineers and Geoscience, N109.57bn is for recurrent expenditure as against N69.13m for capital projects.

The National Iron Ore Mining Company was allocated N1.92bn with N1.897bn set to be expended on payment of salaries, while only N20m was allocated for capital projects.

Out of the total N14.976bn allocated to the ministry and its parastatals this year, N11.976bn, representing 80 per cent of the total, is meant for recurrent expenditure, in contrast to N2.99bn for capital projects.

Reacting to the development, the General Secretary, Steel and Engineering Workers Union of Nigeria, Mr. Kazeem Kadiri, told our correspondent on Monday that the Ajaokuta Steel Company was currently producing nothing, stressing that resources were being wasted on its Interim Management Committee, whose members are receiving salaries for doing virtually nothing.

'Right now, nothing is happening in Ajaokuta Steel Company and the concession agreement reached with the Global Infrastructure Company has been cancelled, while the government has not put in place a policy on how to move the place forward; this is a big problem in itself,' he said.

Kadiri added, 'The Interim Management Committee that was put in place so many years back was supposed to be interim in nature, but they have made themselves a permanent management and they are not doing anything.

'There are 16 members of the committee receiving millions of naira every month as allowances and they are not doing anything. The workers' welfare is not taken care of and they don't even come to the company, while the so-called chairman of the committee hardly shows up there.'

He said stakeholders were not pleased with the government in the area of steel development in the country, noting that a close assessment of activities at the company right from inception till date was not impressive.

According to him, the firm used to produce iron rods and steel when it was being managed properly, but has failed in terms of performance for ages.

Kadiri said, 'Ajaokuta was producing iron rods of different types many years back when it had good management on ground, but now, it is a project and that has not been completed.

'Its blast furnace has not been inaugurated in order to enable the company produce liquid steel from the iron ore that is being mined, and until that is done, the place cannot really move forward as expected.'