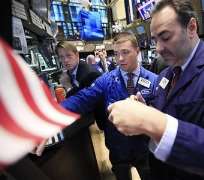 Stock index futures pointed to a lower open for equities on Wall Street on Monday, with futures for the S&P 500, the Dow Jones and the Nasdaq 100 down 0.2 to 0.5 percent.

The Conference Board releases its employment trend index for January at 10 a.m. ET. In the previous report, the index read 104.3.

General Motors (GM.N) aims to raise its profit margin to 10 percent over the next few years, up from the current margin of about 6 percent, Daniel Ammann, chief financial officer, told the Wall Street Journal in an interview.

NYSE Euronext (NYX.N) plans to focus on smaller deals and returning capital to its shareholders after its failed $7.4 billion merger with Deutsche Boerse, the company's chief executive said on Friday.

European shares .FTEU3 fell 0.5 percent after hitting six-month highs in the previous session, with investors worried about whether Greece can avoid a messy default.

Greece's coalition parties must tell the European Union on Monday whether they accept the painful terms of a new bailout deal as EU patience wears thin with political dithering in Athens over implementing reforms.

A surge in hiring in the world's largest economy last month drove the Nasdaq to an 11-year high on Friday as optimism grew that the labor market is on a steady path to recovery.