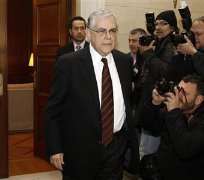 Greece's coalition parties must tell the European Union on Monday whether they accept the painful terms of a new bailout deal to avoid a messy default that could threaten the country's future in the euro zone.

Political leaders must agree on unresolved problems - including labor market change and shoring up domestic banks - to secure the 130 billion euro ($170 billion) rescue Greece needs by March or risk inflaming tempers in the European Union over what is seen as its dithering on implementing reforms.

A socialist party spokesman said leaders of the three coalition parties - who may face anger in parliamentary polls as soon as April - must respond by noon (5 a.m. ET) on Monday. A meeting of political leaders would follow later in the day.

Technocrat Prime Minister Lucas Papademos said after five hours of talks on Sunday that party chiefs had agreed measures including wage cuts and other reforms as part of spending cuts worth 1.5 percent of gross domestic product.

"There are two big issues left - labor and banks ... those have been left for tomorrow," Beglitis said.

Domestic banks are up to their necks in junk Greek government bonds now worth a fraction of their face value and two parties - the conservative New Democracy and the far-right LAOS party - have opposed any further spending cuts.

The euro shed 0.4 percent in early Asian trade to $1.3105, having fallen as far as $1.3075 in thin early trade over worries the whole rescue scheme could flop.

Talks on the Greece's second bailout since 2010 - and an accompanying deal to ease its huge debt burden via its private creditors accepting deep losses on the bonds they hold - have dragged on for weeks.

Now the parties - PASOK, New Democracy and LAOS - must respond to a working group of senior euro zone finance ministry officials who are preparing for a meeting of their ministers later in the week.

"The political leaders must give their response in principle by noon tomorrow (to Papademos), so that it can be taken to the Euro Working Group in Brussels," Beglitis said.

BIG ISSUES
Beglitis made clear the leaders of the three parties had much to negotiate as the deadline nears, and must respond to the proposals by noon (5 a.m. ET).

Greek newspapers Ta Nea and Imerisia wrote on Monday, without naming their sources, that holiday bonuses in the private sector would be maintained but that the minimum wage would likely be cut to 600 euros from about 750 euros.

Ta Nea added that the European Union and IMF were also pushing for a 35 percent cut in supplementary pensions, another sticking point in the talks.

By late on Sunday, no meeting of the Euro Working Group had been formally scheduled for Monday but it could hold a conference call or schedule a face-to-face meeting at short notice, depending on the outcome of talks in Athens.

Greeks have been worn down by a deep recession, now in its fifth year, and wave after wave of austerity measures imposed under the first international bailout in 2010.

Alarmed by the prospect of yet more budget cuts, Greece's two main trade unions said they would call a 24-hour strike for Tuesday in protest against policies which they say have only driven the economy into a downward spiral.

"Despite our sacrifices and despite admitting that the policy mix is wrong, they still ask for more austerity," Ilias Iliopoulos, secretary general of public sector union ADEDY, told Reuters.

ADEDY and its private sector sister union GSEE, which will join Tuesday's strike, represent about 2 million workers or roughly half the country's workforce.

Leftist and communist-affiliated groups will rally around 11 a.m. ET on Monday to march to parliament.

KNIFE EDGE
With Greece facing 14.5 billion euros of debt repayments in March, a bill it cannot meet without further bailout funds, the stakes could not be higher.

Greek officials have emerged increasingly despondent after each round of talks, complaining that the ECB, European Commission and IMF troika was refusing to yield on demands to cut the minimum wage level, axe holiday bonuses and fire public sector workers.

New Democracy and LAOS in particular have staunchly opposed further wage and spending cuts, arguing they risk pushing Greece into an even deeper recession and imposing more pain on Greeks.

The budget cuts worth 1.5 percent of GDP this year appeared to be more than the troika wanted initially although with the Greek economy on a downward trajectory that is a moving target.

Greece's lenders initially demanded spending cuts worth about 1 percent of GDP - or just above 2 billion euros - this year, and say all political leaders must endorse the cuts irrespective of the outcome of the elections.

Papademos said the measures to cut wages and non-labor costs aimed to make the Greek economy more competitive, but he gave few details.

The slow progress in Athens has angered Greece's European partners. Euro zone officials say finance ministers told Greece on Saturday it could not go ahead with an agreed deal to restructure privately held debt until it guaranteed it would implement reforms.

"There is a great sense of frustration that they are dragging their feet," one euro zone official said.