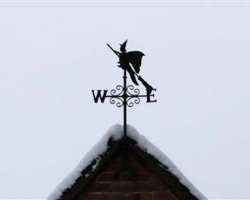 Bitterly cold weather sweeping across Europe claimed more victims on Sunday and brought widespread disruption to transport services, with warnings that the chilling temperatures would remain into next week.

Hundreds have lost their lives in eastern Europe as freezing weather sweeps across the continent westwards, while major airports warned that services would be delayed or cancelled.

Steven Keates, a weather forecaster at Britain's Met Office, said the severe wintry conditions were expected to last, and spread to other areas.

"It will still be very cold, maybe not quite the exceptional temperatures we've seen this last week, but still very cold," he told Reuters, saying the current front which brought snow and ice to Britain overnight was now heading to Belgium and Germany.

"(It will be) perhaps turning increasingly unsettled across southern and eastern Europe, so that will probably bring a risk of snow for Italy across to Greece and up round the Balkan countries."

Nine more deaths from cold were registered in Ukraine overnight, emergencies services said on Sunday, taking the death toll to 131 from a nine-day cold spell which has brought freezing temperatures to the ex-Soviet republic.

A statement from the Emergencies Ministry said 1,800 people were receiving hospital treatment for cold-related ailments.

The cold spell - the most severe for Ukraine in six years with night temperatures down as low as minus 33 Celsius (minus 27 Fahrenheit) in parts - has tested the country's social network to its limits.

Many of the dead were homeless people with bodies being found in the streets under snow, in rivers and in doorways. Metro stations in the capital Kiev have become sanctuaries overnight for the homeless to find warmth.

More than 3,000 heated tents have been set up around the country to provide makeshift accommodation and dispense food and drinks to homeless people.

Eight more people had frozen to death over the past 24 hours in Poland, bringing the death toll there to 53 since the cold snap began, PAP news agency reported National Police Headquarters as saying.

The extreme cold had also caused the death of at least three people in Hungary, ambulance spokesman Pal Gyorfi was quoted as saying by the national news agency MTI.

The demand for ambulances was up 20 percent on a usual day with 3,000 calls, Gyorfi said in a statement.

HEATHROW SERVICES CANCELLED
Airline services from Britain and France were hit as the chilling weather moved west, prompting severe weather warnings to be issued across much of both countries.

London's Heathrow, Europe's busiest airport, said it would run just 70 percent of normal services on Sunday as more than 15cm (6 inches) of snow fell in parts of England overnight and temperatures dropped well to almost -10 Celsius.

"This decision ensures that the greatest number of passengers can fly with the minimum amount of disruption," said Heathrow Chief Operating Officer Normand Boivin.

London's Gatwick Airport said it had received 8 cm of snow overnight but it had remained open, and would be running all scheduled flights. However, many of Britain's other airports were forced to shut runways overnight and warned there could be further disruption on Sunday.

Rail services were affected and many roads were left impassable, and sections of motorways near London were brought to a standstill, forcing some divers to abandon their vehicles. Police said the main roads into the southern port of Dover had also been closed for a while.

The first winter snow fell in Paris overnight coating the Eiffel Tower, and more showers due throughout Sunday. The French capital's main airports were also expecting problems and advised passengers to check with the airlines before travelling.

Meanwhile the death toll rose to four, after a 12-year old boy died of hypothermia on Saturday after falling into a frozen pond in eastern France and a homeless person was found dead in the northeast.