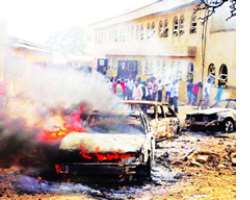 Boko Haram is furious that the Federal Government tricked the Islamist sect for talks in Kaduna and in the process, arrested a kingpin, Abu Dardaa, who had been flown to Abuja for questioning.

The papers had reported that Abu Qaqa was arrested.

'We want to react on what security agents said in respect of the arrest of one of our own. The person that was arrested is Abu Dardaa and not Abu-Qaqa. I am Abu Qaqa,' the speaker declared on phone, adding, 'I'm the spokesman of the Jama'atu Ahlis Sunnati Lidda'awati Wal Jihad. (Boko Haram) Abu Dardaa is the head of the Lagina (Department) of Public Enlightenment and not the spokesman.'

Qaqa has been speaking to journalists in the past after he was introduced as the successor to Abu Zaid, the first speaker. Subsequently, another name Abu Dardaa surfaced. He claimed to be the deputy spokesperson of the sect, but with the passage of time, he metarmorphosed again into Abu Qaqa and has since been issuing most of the statements for the Islamist sect.

Daily Sun observed that the change of guard within the fold necessitated for continuous use of the name Qaqa even after Dardaa has replaced him as the spokesperson. It was believed that Qaqa's name was familiar with the public and changing the name the third time could bring some confusion and misrepresentation by some non-members who could perpetrate other heinous acts with the status of the Information Officer.

Although the SSS has not officially confirmed the arrest of Qaqa, but the sect insisted the man was in the custody of the department, alleging that it was deceived with the dialogue option proposed by the government.'The arrest of Abu Dardaa is an outright deception and betrayal by the Nigerian government and security agents. They proclaimed dialogue and are doing the opposite. His arrest has proven to us that they were waiting for us to avail ourselves so that they can arrest us.

'We purposely sent Abu Dardaa to Kaduna to discuss with some key government functionaries on the issue of dialogue. Indeed, he had started talking to them but unknown to him, they directed some security agents to trail him behind and arrested him. 'This is exactly what happened. He volunteered to present himself for the dialogue but was betrayed. Everybody knows our capability and tactics of operation. It is evidently clear that none of our members could be caught on a platter of gold and without confrontation.

'We initially thought that the much thought about dialogue was true and we actually resolved that after the initial meeting with Dardaa, we would send five representatives to stand for us. 'Part of what we told him to discuss with the government representatives was the unconditional release of our members as pre-condition for any further discussion. I want to reiterate that we want all our members to be released for peace to return and for dialogue to hold.

'We are fully aware that the Nigerian government is deceptive in all ramifications but we resolved to give their offer a try, but unfortunately, this is the outcome of all the calls they have been making on dialogue to us.

'The truth is that even if they arrest all of us, God will protect His religion. We want to reiterate that no amount of threat, arrest and intimidation will stop us from our course. We are not afraid of death and we are ever ready to die. Even before the arrest of Dardaa, many of our members have been arrested.

'Our spiritual leader, Mallam Muhammed Yusuf, was arrested and detained severally and was even killed by the Nigerian security forces but we, his followers, were not deterred from propagating Islam. The arrest or killing of any member of our sect will not stop us from what we are doing and from what we believe,' he added.