Love Brewed In An Internet Pot 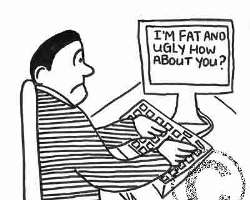 Internet dating is currently seen as an exciting and the easiest way of meeting a partner. Chat rooms and dating sites are now used as platforms for the search of that great person. Internet dating has become popular all over the world including Ghana, whilst some have been successful in their search; others have also encountered several disappointments.

Internet dating, also known as online dating, may be described as a dating system that allows individuals, couples and groups to meet online and possibly develop a social, romantic or sexual relationship. It usually provides an un-moderated matchmaking through the use of personal computers and the Internet.

In my search for what this is all about, I decided to talk to some few people about their experiences. I have these stories to share,

Kojo's Story-“I was bored one day and decided to get into one of the chat rooms. I typed « hello room » and lo and behold a lady by name `Shaddy´ responded, we started chatting and discussed a lot of things.

I enjoyed chatting with her because she was very humorous like my ex girlfriend. It was weird that it was online and not in person but in a way it was easier. I was afraid she wouldn't like the way I looked and I didn't think she would understand my feelings for her since I hadn't met her before. We ended up becoming closer and we became best friends.

Then one day I decided to tell her how I felt, when I did, she told me that she loved me. Falling in love with her has been the best thing in my life. When we met it was perfect, we got along so well. We have been together for a long time and planning for our marriage later this year.”

Adjoa's Story-"A friend of mine gave me a dating site, so I started going through the profiles, she helped me to make one of my own. We decided to leave it to fate and go through the ones that contacted me first. This was how I met Dan, who lived outside Accra; he said he wrote to me because his job was re-locating him to Accra that year, and as a bachelor who wants to settle, he may as well look for a friend or lover where he was going to be living. We exchanged emails with more and more frequency, and seemed to have a lot in common. He asked for my phone number and I asked for his instead. He said that since he was moving he had disconnected his home phone number and only used his cell phone in preparation for his move. We chatted on the phone, and he seemed anxious to meet me, and said he would be in Accra because he would be house hunting in a few months. So, we kept talking on the phone, and I began to notice he didn't answer my calls mainly during evenings and weekends. He said since work was paying for it, he had to limit his evening and weekend calls. Once again, this guy had an excuse for everything. I did not mind, because I realized I have fallen in love with him.

We met in person the following month; it was great and exciting. We even took a romantic weekend together to Akosombo. He seemed genuine. I really thought we were heading somewhere serious until I saw sms messages on his phone whilst he was in the bathroom. It was from his wife, and to my surprise, he was still very much corresponding and still in the process of meeting other ladies in Accra.

Anyway, I was hurt to find this out of course; I have not confronted him with this yet, because I wanted to have fun with it. I have created a fake profile on the site I found him on and I am going to show him the real me.”

These are just some of the stories and I know there are a lot other successful and bad ones. Some of these stories allow us to understand the fact that, the anonymity of internet dating has afforded some people a new playground for scams, and has allowed people to be anyone they think you want them to be because they are engaging you primarily through the written word.

I believe we all need to understand the dangers in this kind of love search so we can make searching for a partner a safe one. We must be able to identify the many hidden dangers in the world of Internet dating, and also recognize the signs and red flags so that Internet dating experience stands the best chance of success, rather than leaving a bad taste in our mouth.

As you may know, it is also one of the easiest places for someone to cheat on their spouse or significant other, or to use it as a place for promiscuity.

A friend told me a lot of Ghanaians are involved in both local and long-distance internet romances, according to him, Ghanaians can be found on most dating websites of the world, most of them looking for white people to marry. This has allowed certain people to pose as white men and women and has succeeded in making fun of these Ghanaians and also cheating them.

Many times, before someone can verify that all they have been told over the internet by someone they are interested in dating is the truth, they are already emotionally vested and don't want to hear the truth, or get hurt by hearing the truth.

On photographs, be aware that if you put your photo on the Internet anyone can right click on their mouse and put that picture anywhere that they like in any context. Also consider when looking at photos of other people, because, many people put on photographs that are years out of date when they were slimmer, younger, etc.

Don't give out your telephone number under any circumstances. As much as possible, call the other person from a public telephone.

Take your time and don't be rushed into meeting anyone, especially if you have any doubts at all about someone. When you decide to meet, take the same precautions over your personal safety that you would with any stranger. Meet in a public place, tell someone where you are going and with whom, be careful about your drink and take a taxi home so that your date doesn't know your home address.

On this note I would like to end by saying, just be careful!!!