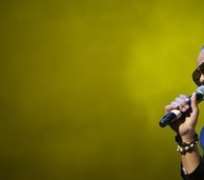 The Latin Awards are scheduled to take place in March

US Rapper Pitbull is to receive the prestigious president's prize at this year's BMI Latin Awards, organisers have announced.

The top award is presented to artists who have “distinctly and profoundly influenced the entertainment industry”.

Last year the 31-year-old had a string of hits including Give Me Everything, Shake Senora and Rain Over Me.

Previous recipients of the award include Taylor Swift, Gloria Estefan and Willie Nelson.

His music incorporates a wide range of genres, from reggae and hip-hop to dancehall and Miami bass.

Although his lyrics are often bilingual – in Spanish and English – he refuses to be pigeonholed by his background.

“I'm not a Latin rapper,” he told one interviewer at the start of his career. “I'm a rapper that happens to be Latin, you feel me?”

Pitbull hit number one in the UK last April with Give Me Everything, which went on to become the sixth best-selling single of the year.

His album, Planet Pit, went to number 11 later in the year.