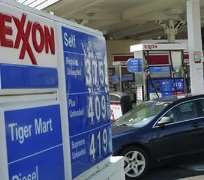 "Even taking this into consideration, production volume was disappointing," Cheng wrote in a note to investors.

While full-year 2011 output rose 1 percent, capital expenditure was at the top of Exxon's multi-year guidance range, at a record $36.8 billion, and oilfield spending generally is seen rising even further this year.

Exxon posted a fourth-quarter net income of $9.4 billion, or $1.97 per share, compared with $9.25 billion, or $1.85 per share, in the year-ago period. Analysts, on average, had expected earnings of $1.96 per share, according to Thomson Reuters I/B/E/S. Analysts lowered their expectations by a few cents in the past week.

The Irving, Texas-based company spent $10 billion during the quarter on capital projects and exploration, in line with the same period in 2010.

Shares of Exxon were down 1.8 percent at $83.97 in late morning trading on the New York Stock Exchange.