Does your kissing technique reveal your personality? 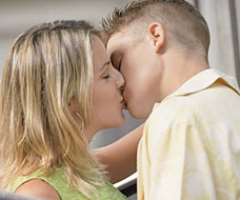 Although it's the warmest of greetings, a kiss may actually reveal you to be a frosty character.

Whether you go to the left or right when you go in for the kill shows the type of person you really are.

Some 80 per cent of men and women, whether left or right handed, turned their heads to the right when moving in on their target.

However, the remaining 20 per cent of left leaning cheek to cheek kissers are 'less emotional' than their right leaning counterparts, according to a study.

Researchers studied hundreds of volunteers, and observed many more kissing in public places, and they found that the way they kissed displayed certain personality traits.

The main finding was that those who turn their heads to the left are not really making a warm gesture at all - because they are using less emotional parts of their brain.

"One theory that has been put forward is that by turning their head to the right, the individual reveals their left cheek which is controlled by the emotive right cerebral hemisphere," said lead researcher Dr Julian Greenwood, of Stranmillis University College, Belfast.

Air kisses - often practised by thespians and people working in the media - are another 'unemotional' type of greeting.

The study is due to be published next month in the scientific journal Laterality.

Ever since the first kiss was recorded in Vedic scriptures in 1500 BC, the dilemma of how, when and whom to kiss has been an issue.

The Roman Emperor Tiberius banned kissing to try to stop the spread of the disfiguring disease mentagra.

But other research has pointed out its beneficial effects. One Japanese study found that 30 minutes of pasionate kissing can help control hay fever.

Tests suggest that it relaxes the body and reduces the production of histamine, a chemical pumped out by cells in an allergic response to pollen.

Another study showed that 88 per cent of couples in long and happy relationships have lips of similar size – and men's tend to be on the thinner side, a survey found.