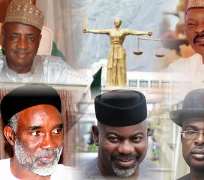 The sack of 5 governors; Timipre Sylva of Bayelsa, Murtala Nyako of Adamawa, Aliyu Magatakarda Wamakko of Sokoto, Ibrahim Idris of Kogi and Liyel Imoke of Cross Rivers state today, by the Supreme Court has put an end to the issue of tenure of Governors in Nigeria, especially as it concern post election matters. In reaching their decision The Supreme Court said its judgment was based on the constitution of the Federal Republic of Nigeria-which does not envisage a governor spending a totality of 8years in office. Technically and in law, the tenure of the affected Governors is deemed to have ended May 28th 2011 the Court ruled. It also said allowing they Governors stay more than 8years will be a violation of Section 182 (2). The decision of the apex court is final.

While the Supreme Court judgment is expected to set a precedent to election matters, it will also on the other hand, create power tussle in Adamawa State, actuate anticipated fierce legal battles in Kogi and Bayelsa States. Cross River and Sokoto States will not experience difficulties in implementing the Court’s decision.

In Adamawa State, elections are due to hold in a few days time, precisely on the 4th of February, 2012 according the time table released by INEC, but whether the elections will be halted or not cannot be determine except INEC makes a public statement halting the exercise, otherwise it is assumed the elections will hold as planned, after all the Supreme Court did not make any consequential order asking INEC to halt planned elections in the State. However, more problematic at this time is the provisions of section 178(2) which provides that elections must be held on a date not earlier than 60days and not later than 30 days before the expiration of the term of the last office holder. Perhaps there will be need for further clarifications by the Apex Courts since the tenure of the Governors by law ended 28th May, 2011 and not 28th May, 20012!

To add salt to injury, for almost two months now, the Adamawa State House of Assembly is under locks and keys and without a recognized or substantive Speaker who naturally should have been sworn in as acting Governor the moment the Supreme Court’s judgment is announced in compliance to Section 191 (2). However, notwithstanding the absent of a speaker, assuming the House is in session, the highest ranking member in the House at this material time i.e. the Deputy Speaker would have been sworn in immediately as the Acting Governor to fill the vacuum since Government is a continuum and cannot afford vacuity.

In Kogi State, I envisage trouble. According to the ruling of the Apex Court, the governors’ tenures ended on May 29, 2011. The duo of Capt. Idris Wada and Arc. Yomi Awoniyi who won the election that was conducted before the incumbent tenure elongation on the plat form of PDP were immediately sworn in as ‘substantive’ Governor and Deputy Governor respectful, almost at the speed of light minutes the Supreme Court finished making its pronouncement. This hurry hurry is very suspicious! To confirm my suspicion, it was reported The Chief Judge of Kogi State refused to swear in Captain Idris Wada (rtd) and his Deputy. Instead the President of the Customary Court of Appeal was pressurized into swearing them in.

It was the late Lord Denning who held in UAC V. MCFOY (1962) AC 152 that “you can't place something on nothing and expect it to stand”.

The whole exercise (election) that gave Wada the impetus to swear in himself as the Governor of Kogi State was based on the premise that Alhaji Ibrahim Idris's tenure was to end May 28th 2012. Now that the supreme court has pronounced Idris’s continued stay as Governor of Kogi State null, illegal, invalid and declared Idris ought to have vacated since May 28th 2011, the election of Wada MAY as well be a nullity. Since nothing can stand on nothing, the whole exercise that brought them this far WOULD have to be considered illogical, illegal, invalid and of no effect in the eyes of the law.

In Bayelsa it was reported Governor Timipre Sylva was celebrating the outcome of an appeal ironically instituted by Buba Marwa (CPC Gubernatorial Candidate, Adamawa State) and INEC against him and his colleagues. Sylva’s delighted mood should be expected. PDP refused to play him as their Flag bearer in the recently concluded Party primaries, instead a certain Hon. Seriake Dickson who is widely believed to have the massive support of Jonathan/PDP NEC was adopted. Sylva went to Court, asking the court to compel INEC not to recognized Dickson and instead the court should validate the first Party Primaries which was conducted last February where he emerge the ‘authentic’ PDP candidate. His prayers did not succeed, but with the happening now his augment seem to have been reinforced with the Supreme Court ruling.

Governor Timipre Sylva, like Jibrin Isa Echocho who won the first PDP party primaries conducted last year in Kogi State, also refused to cross to another party, both hoping for a miracle! And it did happen! It happened today with the Supreme Court Judgment sacking the 5 Governors and contending their tenures indeed ended on the 28th May 2011.

In a normal sense it seems impossible for Jibrin Isa Echocho to turn back the hands of time but technically, there are POSSIBILITIES, that's why those sharp men (Idris Wada and Yomi Awoniyi) quickly sworn in themselves immediately hoping to reduce those possibilities which is by the way through the PDP Leadership, INEC or the Courts of Law.

I pity Sylva and Echocho because there is no guarantee that INEC will agree to the first primaries held last year and which favours both men if PDP provide "cogent and verifiable reasons" for substitution of candidates. The options left for them is the Courts. More pathetic however, is the case of Sylva who is believed not to be in tune with the powers that be, out of power, he MAY not be able to show himself publicly or MAY be arrested and under prosecution as it is already anticipated in some quarters. So how can he fight from hiding or behind the bars?

Sokoto and Cross River States will relatively have their boats rocked, but with minimal effects.

As it is customary, Cross River will enjoy a relatively peaceful transition. Governor Liyel Imoke won the last and the first PDP primaries held in the State, whichever way; he’s expected to still fly the party’s flag when elections are called for. It is expected that the Speaker of Cross River State House of Assembly will assume the position of an Acting Governor and with no known crisis in the State chapter of the PDP, will help Governor Liyel Imoke gainer victory at the general polls especially with no strong opposition party.

The Situation in Sokoto State is a bit similar with that of Cross River State, but also a bit twisted. Governor Wamakko won the last PDP primaries held in the state. He also won the first one conducted in February, 2012. It is expected that the Speaker of Sokoto State House of Assembly will assume the position of an Acting Governor immediately. The party will also expect the Speaker to help Wamakko win at the general pool. Though, some party followers who believed that Jonathan/PDP should punish Wamakko because of his alleged roles during the PDP Presidential Primaries last year, where disappointed when Wamakko against all odds won the just concluded PDP primaries in the state in December. These Diehards, still believe they have another opportunity now to deny Wamakko PDP Tickets. This, to me, I think is unlikely unless off course, if Jonathan inherited Obasanjo’s unforgiving heart when it come to dealing with perceived political foes. Worst case scenario, PDP may forfeit Sokoto State if it insist on deposing Wamakko.

On the other hand, Wamakko should expect a fierce opposition as the main opposition party, the ANPP recently stepped up its games with the adoption of a young former Banker Alhaji Yusha'u Ahmed as the Party’s flag bearer and the re-absorption of the former Governor, Attahiru Bafarawa to lead the Gubernatorial Campaign.

Finally, why the Supreme Court’s Judgment today on Tenure Elongation of the 5 the Governors is believed to have buried uncertainties surrounding the issues of tenure elongation/extension of elected public officials in our political landscape, the same judgment has, in the same context, exhumed otherwise quite questions: Since most parties conducted two primaries between February 2011 and now, which Party Primaries will INEC Obey? The former or the latter? Whether the INEC will recognize new Candidates from parties? Will INEC go ahead with the elections as already planned?

These are important questions begging for immediate answers as everyone seems to be confused. The questions now seem to lie with Jega’s INEC who must answer them accurately, otherwise it will be sent back to the sender-The Supreme Court.