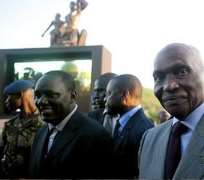 The Constitutional Council, in the same ruling, rejected an appeal by world music star Youssou N'Dour and two other candidates against a decision on Friday blocking their presidential bids.

The court rejected several other appeals including some by Wade's camp against a number of opposition candidates, declaring them unfounded.

The council's decision on Friday to validate the candidacy of 85-year-old Wade sparked violent protests. The opposition has vowed to make the country "ungovernable" if Wade insists on running for a third term.

Wade's rivals say the constitution sets a limit of two terms on the president. But Wade, who came to power in 2000 and was re-elected in 2007, has argued that his first term pre-dated the 2001 amendment establishing the limit.

After violent protests on Friday, calm returned to the capital Dakar over the weekend, but around the presidential palace truckloads of police in full riot gear were deployed, armed with tear gas, grenade launchers and truncheons.

Senegal is the only country in mainland West Africa not to have had a coup since the end of the colonial era. February's poll, and a possible run-off a few weeks later, are seen as a test of social cohesion in the predominantly Muslim country.