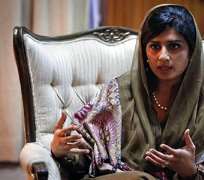 Afghanistan will press Pakistan for access to Taliban leaders during a one-day visit to Kabul by Pakistan's foreign minister, with Afghan officials hoping to ease cross-border strains and lay the ground for peace negotiations with the insurgents.

Hina Rabbani Khar will visit Kabul on February 1 to discuss reconciliation and nascent plans for peace talks ahead of a meeting between representatives of the Afghan government and the Taliban in Saudi Arabia.

Khar's trip will mark the first high-level meetings between officials from the countries in months.

Pakistan is seen as critical to U.S. efforts to stabilize Afghanistan before foreign combat troops leave in 2014.

"We hope it will mark a new phase in the relationship between both countries," Afghan Foreign Ministry spokesman Janan Mosazai said Monday.

Senior Afghan security sources told Reuters that Afghan officials would use Khar's visit to press for access to Mullah Abdul Ghani Baradar, a co-founder of the Taliban captured in Pakistan in 2010, as well as other members of a Taliban council known as the Quetta Shura, after the Pakistani city of Quetta where the leaders are said to be based.

Afghan officials want direct access to senior Taliban members and advisers because they are the main decision makers for the insurgency and will be crucial to winning support for the fledgling peace process.

Pakistan has consistently denied giving sanctuary to insurgents and denies the existence of any Quetta Shura.

Baradar, a close associate of al Qaeda leader Osama bin Laden before the September 11 attacks in the United States, had been ranked second to Taliban leader Mullah Muhammad Omar.

He was captured in Pakistan's biggest city of Karachi by Pakistani and U.S. intelligence agents in February 2010.

"When the Pakistan delegation visits here, we will be asking for direct access to the Quetta Shura, or access to Mullah Baradar, who has been in Pakistan custody, as a gesture of good faith," said a senior Afghan security source.

"We want sincere cooperation from Pakistan in regards to peace talks," said the source, who declined to be identified.

Ties between the neighbors were severely damaged after the assassination in Kabul last September of Afghanistan's main peace negotiator, Burhanuddin Rabbani, by an insurgent messenger carrying a bomb concealed in his turban.

Afghanistan accused Pakistan of involvement in the attack and of trying to sabotage negotiations with the Taliban, charges Islamabad denied.

"PARANOID"
Critics accuse Pakistan of using militant groups as proxies in Afghanistan to counter the growing influence of rival India there and of trying to use the proxies to ensure a government in Kabul that is friendly toward Pakistan. Pakistan rejects the allegations and says it wants peace in Afghanistan.

Peace talks between the Taliban and the Afghan government will be held in Saudi Arabia this year, an Afghan official in the Saudi capital Riyadh told Reuters by telephone.

"The talks will be held in Saudi, but there is no set date yet," the official, who declined to be named, told Reuters.

Saudi Arabia, along with Pakistan and the United States, backed Islamist insurgents fighting Soviet forces in Afghanistan in the 1980s, and later became one of only three countries to recognize the Taliban government.

Riyadh also has considerable influence in Pakistan because of its economic support and it may be able to influence Pakistan's Afghanistan policy.

The Taliban announced this month they would open a political office in the Qatari capital Doha to support possible peace talks with the United States and key allies, seen by supporters as the best chance of reaching a cease-fire ahead of the foreign troop withdrawal over the next three years.

Afghan President Hamid Karzai fears being sidelined by U.S.-led efforts to forge peace with the Taliban, so he may be pushing for alternative talks in Saudi Arabia.

"The government has been paranoid since the secret talks opened between the U.S. and the Taliban, and we believe Pakistan feels the same," the Afghan security source said.

As a confidence-building measure, the Islamist group which ruled Afghanistan from 1996 until the U.S.-led invasion of the country in late 2001 called for the release of five members being held at Guantanamo Bay, a U.S. military enclave in Cuba.

A spokesman for the U.S. Embassy in Kabul declined to comment on the likelihood of separate Afghan-Taliban negotiations, but said senior U.S. envoys had consistently called for Pakistan to be part of efforts to end a war stretching into its 11th year.

"We support an Afghan process that includes Afghans talking to Afghans," he said.