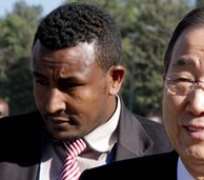 Discrimination based on sexual orientation had been ignored or even sanctioned by many states for too long, Mr Ban told an African Union summit.

Homosexuality is illegal in many African countries – a situation which has drawn increasing criticism from activists and the West.

The two-day summit, in the AU's new building in the Ethiopian capital Addis Ababa, is set to elect a new AU Commission chair.

South Africa has put forward long-serving minister Nkosozana Dlamini Zuma – the ex-wife of President Jacob Zuma – to challenge the incumbent, Jean Ping of Gabon, who has been in post since 2008.

If Ms Zuma wins Monday's vote, she will be the first woman to take the helm of the 54-nation bloc's executive council.

“Confronting these discriminations is a challenge, but we must not give up on the ideas of the universal declaration (of human rights),” he said, quoted by AFP.

Homosexual acts are illegal in most African countries, including key Western allies such as Uganda, Nigeria, Kenya, Egypt and Botswana.

Both the US and UK have recently warned they would use foreign aid to push for homosexuality to be decriminalised on the socially conservative continent.

The Arab Spring, Mr Ban noted, was a “reminder that leaders must listen to their people”.

“Events proved that repression is dead. Police power is no match to people power seeking dignity and justice,” he said.

He also called on the leaders of Sudan and South Sudan to reach agreement on how to divide up their oil wealth. Some analysts warn the feud risks seeing a return to all-out conflict.

'Nuisance'
Delegates are meeting in the new $200m (£127m) AU headquarters, funded and built by China, which was officially opened on Saturday.

The 100m tall building – which dominates the Addis skyline – is a “testimony” to the growing relationship between China and Africa, project co-ordinator Fantalum Michael said.

It is the first summit since the death of Libya's Colonel Gaddafi, who played a key role in the formation of the African Union.

Heads of states never admitted it, but his eccentric manner and constant grandstanding at summits would often hold up any meaningful talk for hours, the BBC's Will Ross reports from Addis Ababa.

“He was a nuisance,” one senior politician told our correspondent.

As well as the growing tension between Sudan and South Sudan, the war in Somalia and the escalating violence in Nigeria are also expected to be discussed during the summit.