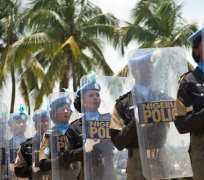 The explosion at a Kano bus terminal caused no casualties and its causes were not immediately clear, but it forced the area to be evacuated, the army and police said.

The deadliest violence to hit Kano came last Friday, when coordinated gun and bomb attacks, claimed by the Islamist group Boko Haram, killed at least 185 in the primarily Muslim city.

“Many arrests have been made since the attacks,” the police source said on condition of anonymity, referring to the Friday assaults.

“We have arrested around 200 attackers and 80 percent of them are Chadians. They came in as mercenaries.”

There were indications the Chadians had been paid to participate in the recent attacks attributed to Boko Haram, the source added.

Boko Haram has been blamed for scores of other attacks in Nigeria, mainly in the north, and security forces have long suspected it of smuggling arms into the country through the porous northeastern borders with Chad and Niger.

A UN report on regional security released on Wednesday said there was evidence suggesting the Nigerian group had Chadian members who had received training from Al-Qaeda’s north Africa affiliate.

But a Nigeria specialist with the International Crisis Group (ICG) said it was unlikely the sect had such a high number of foreigners in its ranks.

“I was shocked to hear that myself. Personally, I don’t believe it,” said Kunle Amuwo of the ICG, when asked about the police claim that most of those arrested had come from Chad.

“We know some foreigners have been implicated and continue to be implicated, but that number is huge,” he said, adding that, based on his research in the region, he believes most Boko Haram members are dejected Nigerian youths.

Nigerian authorities have come under immense pressure over the spiralling violence blamed on the Islamists and have in the past been accused of rounding up innocent civilians in response to attacks.

“Following previous attacks by Boko Haram, the security forces have often resorted to dragnet arrests, rather than arresting people on the basis of a reasonable suspicion that they committed an offence,” Amnesty International said earlier this week.

There was no immediate evidence linking Thursday’s blast at the bus terminal in Kano to the Islamist group.

“We just had an explosion, nobody can confirm the cause. No loss of life or injuries were recorded. The area is being evacuated,” a police spokesman in the city, Magaji Majia, told AFP.

A witness however claimed two people were injured.
Locals say the area, known as New Road, holds a bus terminal for people travelling to the country’s eastern region.

Before the explosion, tension in the violence-plagued city had partly eased: banks, shut since attacks last Friday, had reopened, and there was much activity at the main market in the Sabon Gari neighbourhood, according to an AFP reporter.

But an exploding tyre caused a brief panic near the market, as still-on-edge residents started running, fearing that another bomb had gone off.

The police source who reported the Boko Haram arrests, also said that suspected members of the sect had reached out to the police for potential dialogue, with the emir of Kano as mediator.

The emir is the most important traditional Muslim leader in Kano.

“They said they want the emir to mediate in the dialogue they proposed,” the source said.

But Boko Haram initially said it was fighting for the creation of an Islamic state in deeply impoverished northern Nigeria and launched an uprising in 2009 that was put down by a brutal military assault.

The group went dormant for more than a year before re-emerging with attacks that have become increasingly sophisticated.

It is now believed to have a number of factions with differing aims, including some with political links and a hard-core Islamist cell.